Bollywood Songs having Dialogues In between 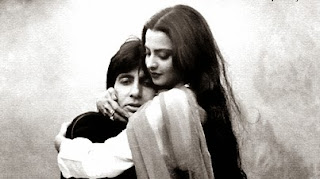 There have been many songs in Bollywood which are not mere songs but they are also decorated either with a dialogue or a monologue.Remember the song from Silsila "Ye kahan aa gaye hum" in which Amitabh Bachchan  in his own voice renders  Main aur meri tanhaai……This trend is not new,since 50s there have been many songs where voice of Film Actors were used to enhance the beauty of the song.Here are some of my favorite such songs.
Dil ki umangein hai jawan – A fun song picturised on Nalini Jaywant, Dev Anand and Pran.in the 1955 film Munimji. It becomes hilarious when Pran is urged to sing – Gaaiye na kya mushkil hai said by Nalini Jaywant

Duniya bananewaale kya tere -This song from Teesri Kasam has Raj Kapoor narrating the love story of Mahua – a beautiful girl. Raj Kapoor mesmerises you with his narration

Naino waali ne haaye mera dil- This song from Mera Saaya has the voice of Sunil Dutt in between the song.

Aaj ki raat ye kaisi raat-This is a sensuous song from Aman (1967) rendered so effectively by Mohammed Rafi, while Saira Banu is whispering the sweet nothings in Rajendra Kumar’s ears.

Nafrat karnewaalon ke seene mein- Another song from a Dev Anand film Johny Mera Naam. Its a monologue/ shayari by Kishore Kumar himself.

Are rafta rafta dekho aankh meri ladi hai-This song by Kishore kumar brilliantly composed by Kalyanji Anandji and picturesed on Dhermendra and Rekha is one of the high lights of the song.

Tere bina zindagi se koi-This song is a background song but your heart just melts when you hear this famous dialogue between Suchitra Sen and Sanjeev Kumar. Along with the music, these lines form the soul of the song, taking the song to some another level.

Ye kahan aa gaye hum-This beautifully picturized song has Amitabh Bachchan's monologue in this song in his rich baritone is as famous or even more as the song itself. Main aur meri tanhaai……