Dev Anand was a Special Yatri in the Bus To Lahore 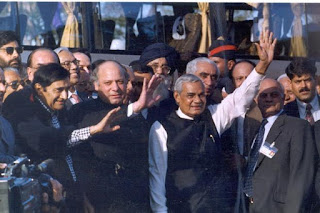 Dev Anand who did his graduation from Government College Lahore in 1943, left Lahore the same year to join Bombay Film Industry.It took him 55 years to come back to Lahore.This time he was a special guest accompanied by the Prime Minister Atal Bihari Vajpayee.
The famous Lahore Bus was inaugurated by Atal Bihari Vajpayee in Feb 1999. In fact 2 buses were sent to Lahore accompanied by many celebrities.
.Atal Bihari Vajpayee was his great admirer. Atalji wanted Devsaab to accompany him to Lahore, to which he readily agreed.he was in the same bus in which Atal ji travelled. The inaugural bus also carried Indian celebrities and dignitaries such as  Satish Gujral, Javed Akhtar, Kuldip Nayar, Kapil Dev, Shatrughan Sinha and Mallika Sarabhai. 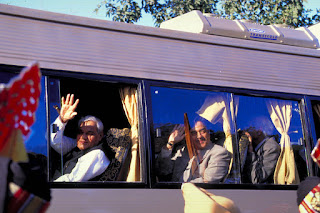 The Wagah/Attari border looked like a glitzy wedding pandal and large crowds milled around on both sides of the metal gates. Viewing platforms had been erected for the media. The crowds enjoyed the tunes played alternately by the Pakistani Rangers and the Indian Border Security Force bands, some breaking into dance. The atmosphere was charged with anticipation and emotion. But the bonhomie did not please everyone.
Dev Anand in an interview to out look magazine said "At Wagah, we all jumped off the bus. The two prime ministers hugged each other as the elite of the two countries met. The people, their voices-all were the same. 'The PMs are shaking hands, I told the crowd. 'Make them shake their hands. At that instant, I caught Nawaz Sharif's eye. He had a look of recognition. We're from the same college, he told me. It struck a bond." Nawaz Sharief requested a picture with Devsaab, and posed to look 'alright' with Dev Anand.Nawaz Sharif was also a student of Lahore Government College but he was much junior.
Devsaab was accorded a hero's welcome at the Government College, Lahore. Young boys and girls mingled with Devsaab's old fans with the entire college staff standing in line to see and greet their alumnus.
'Where is the boundary?' he asked. 'Where is the animosity?' And the crowd went mad with 'We love you Devsaab' chants.

Posted by /bolywoodfiles.blogspot.com at 11:27:00 No comments: