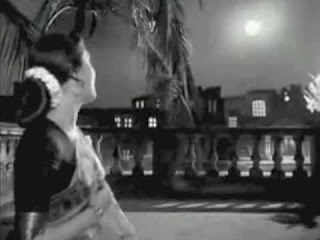 My blogs on the theme songs are very well appreciated by the readers. In this blog I am taking a few romantic songs associated with the moon.Moon has fascinated and charmed the poets and the lovers alike. Poets have turned into lovers and lovers have turned into poets because of its beauty. Perhaps the moon may be the coolest thing a man can perceive in his life, besides his lady love. From Shakespeare to our Bollywood lyricists — all do mention a lovely romantic moonlit night in their creations.
The silence and the beauty of the moon have that flirtatious effect on everyone.Here are few such songs from the  Golden Era Hindi films.

Posted by /bolywoodfiles.blogspot.com at 12:56:00 No comments: