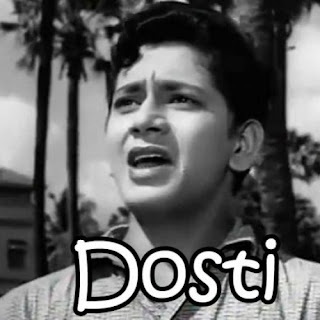 The Filmfare Award in 1965 went to Dosti(1964) for five categories including three categories namely – music director, singer and lyricist gone to Dosti for the song Chahoonga main Tujhe Sanj Savere –The song was brilliantly rendered by Melody King Mohd. Rafi Saab and was composed by Laxmikant-Pyarelal and written by Majrooh Sultanpuri.
Laxmikant Pyarelal were the upcoming Music director Many of their earlier films were not successful at the Box Office only Parasmani was successful. Dosti was their first Super Hit film and the music was also super hit. The song Chahoonga main tujhe sanj savere tune was composed much earlier than any Parasmani song by the duo with Lata Mangeshkar in mind. They could not find a situation in their early films to use the song properly.
Originally the lines of the song written by Mazrooh were Chauhingi Mein Tujhe Saanjh Savere, Phir Bhi Kabhi Ab Naam Ko Tere, Awaz Mein Na Dungi.
Dosti was a small budget movie of Rajshri Films and getting Mohammad Rafi and Lata the Established singer was out of the budget for the composer but they thought of approaching Rafi to sing songs for Dosti.
They were very apprehensive when they drove to Rafi’s mansion early that day not knowing if the great singer would agree to sing for a low-budget movie and for such young, struggling music directors such as LP.
During the musical sitting of Dosti, Laxmikant sang this song out for Rafi at the very tail end of their session before departing Rafi’s house as a song they kept in their pocket as a reserve. Rafi was completely bowled over by the tune of Chahoonga  main tujhe , he agreed to sing songs for Dosti for the sake of singing this song. LP replied that there was no situation in the movie for this song. They did not want to use it. Rafi insisted persistently and said that he would sing all the songs for free if Chahoonga main tujhe was included in the film.  LP returned back and had to make the writer, producer, director re-write the story to include Chahoonga  main tujhe as a primary song in the film.
The movie was released and took India by storm in 1964. Rafi sang 5 solo songs in this film, all the songs were hit Rafi Saab had given his golden voice to many unknown actors, even in Dosti two boys played the part of friends were Sudhir Kumar and Sushil Kumar. All of the songs lip-synced by Sudhir Kumar (Mohan), the blind boy.  Even as a unique coincidence Dosti is the only movie in Hindi Cinema which made a record for the biggest hit without heroine.
Rafi Saab was honoured by the Government of India with the coveted Padmashri Award as well as National Film Award for the Best Male Playback Singer for this song “Chahooga main Tujhe“ 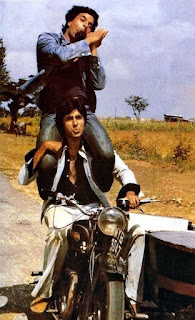 There is nothing like having a ‘Saccha Dost’, who has always been by our side through thick and thin. The first such friendship comes to our mind is that of Lord KRISHNA and SUDAMA.And when it comes to Bollywood industry, which is known worldwide for depicting friendships or romantic relationships, has left a deep mark in our hearts by giving us many films on frienship and superhit friendship songs to sing along to.the first song that comes to mind when we think of a Bollywood song on friendship. The bond between Jai (Amitabh Bachchan) and Veeru (Dharmendra) remains an example of friendship even today.I go back to 60s when I was a school boy,the song from Dosti(1964)"Meri Dosti Tera Pyaar"and Gaban(1966)"Ehsaan mere dil pe tumhara hai dosto"made an impression on my heart.So I have taken these 2 songs along with other popular songs on this blog.

Posted by /bolywoodfiles.blogspot.com at 10:49:00 No comments: