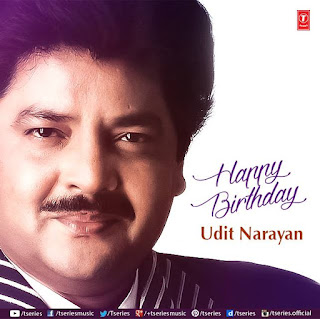 Udit Narayan was born in Bhardah, in Saptari district in the Terai plains of Nepal on 1st Dec 1955.He began his career by singing in Nepali, Maithili and Bhojpuri .He sang folk songs for Radio Nepal throughout the early 1970s. In 1978, he moved to Mumbai on a music scholarship.
He got his first break in 1980, when noted music director (composer) Rajesh Roshan asked him to do a song for the Hindi film Unees Bees, in which he got opportunity to sing with his inspiration, Mohammed Rafi.The actual success story of his career began in 1988 with the successful Bollywood movie Qayamat Se Qayamat Tak.The song "Papa Kehte Hain Bada Naam Karega"made him one of the leading playback singers in the Indian film industry,he became the voice of Aamir Khan.The song "Pehla Nasha " gave him the superstardom.

He has sung 25,000 songs in over 36 languages.He has won three National Film Awards and five Filmfare Awards. He is the only male singer in the history of the Filmfare Awards to have won over three decades (winning in the 80s, 90s, and 2000s). 21 of his tracks feature in BBC's "Top 40 Bollywood Soundtracks of all time"
He was paired with Alka Yagnik to sing duet for QSQT,their duets became so popular that he sang most of his duets with her throughout his career.Their  duets were not only chart busters but most melodious and romantic songs ever created by maestros like Nadeem-Shravan, Anand-Milind and Anu Malik who also have won many awards.

The first Song from Unees-Bees 1980 A duet with Rafi

The First Duet with Alka Yagnik from  Sannata 1981

The First Duet with Lata from Bade Dil Wala 1983

The First Duet with Kishore Kumar from Kehdo Pyar Hai 1983

Posted by /bolywoodfiles.blogspot.com at 09:52:00 No comments: