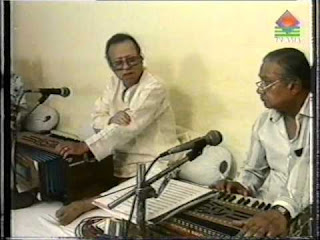 The swan song is a metaphorical phrase for a final gesture, effort, or performance given just before death or retirement.  Thenmavin Kombath, a Malayalam film by Priyadarshan was the last film R D Burman signed, but he died before he could score for the film.It was the song Ek Ladki Ko Dekha from 1942 A Love Story was the last song recorded before his death.But the real Swan Song is ‘Kuchh na kaho’.
R d Burman’s last recorded song is ‘Kuchh na kaho’ in Lata Mangeshkar’s voice. It was recorded soon after RD’s death in January 1994.

The late 80s and early 90s were not good for Pancham. The general perception was that he had lost his touch.  The songs that he did, generally failed to make a major impact on the public.  Where R.D. Burman had made a career from Western "inspired" songs, he found that he was repeatedly being outdone by Bappi Lahiri's Western "inspired" disco.  In 1988 at the age of 49, he suffered a heart attack.  He underwent surgery and continued to make music.  But his career limped into the 1990's with very lackluster commercial success.
Many Producers and Directors who were working with Pancham earlier have now dropped Pancham from their future projects. Anand-Milind were picked over Pancham da for Qayamat Se Qayamat Tak (QSQT), Subhash Ghai who signed Pancham earlier for his upcoming film Ram Lakhan also dropped him by replacing Laxmikant Pyare Lal.
It was Vidhu Vinod Chopra who worked with him in Parinda had faith on him repeated him in 1942 Love Story despite suggestions from his well wishers not to take him. 1942- A Love Story was one of Rahul Dev Burman’s last soundtracks and indeed he left the industry with a lot to remember.
Every song of this movie is a master piece “Kuch Na Kaho”, is featured twice, once by Kumar Sanu and the other by the illustrious Lata Mangeshkar. The slow tune is once again delightfully intertwined with the R.D. Burman touch in a violin.The teaser number, “Rooth Na Jana” brings us back to the golden era with its backdrop consisting essentially of the flute areas. The song is at times upbeat, sweet and Kumar Sanu once again emotes excellently.
“Ek Ladki Ko Dekha” the song sung by Kumar Sanu  was as whimsical and breezy as it is picturized. The light soft tune has a backdrop of a soft drum backdrop, which is complimented superbly by the sitar. The song being on of Sanu’s biggest hits cannot only be identified by the classes but the masses as well.
The film got all the 4  musical Awards,Best Music Director for R D Burman,Best Lyricist for Javed Akhtar,Best male Play back Singer for Kumar sanu and the Best female Singer to Kavita Krishnamurti.

Posted by /bolywoodfiles.blogspot.com at 11:30:00 No comments: