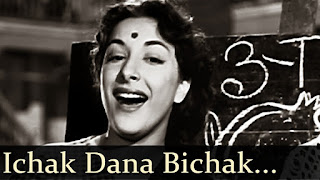 Have you ever noticed that there are some Hindi songs which ask questions and the answer is given by the hero or heroine?. This theme came into my mind when I was watching the old movie Chori Chori. The song Jahan Main Jaati Hoon...Yeh To Batao Ki Tum Mere Kaun Ho from this film made me think of writing this blog on this theme.
Songs based on ‘Riddles’ (Paheli in Hindi) used to be quite popular in the Golden Era of Hindi Film Music and a few of them are still played in children programs in schools.
The oldest hit song in this theme came into my mind from the film Anmol Ghadi "Awaaz De Kahan Hai, Duniya Meri. Jawaan Hai sung by Noorjehan and Surendra. Another hit song "Ichak Dana Bichak Dana, Dane Upar Dana from Shri 420 also fit in this theme.
Here are many such hit songs in this post.