The Lengthiest Songs of Hindi Cinema 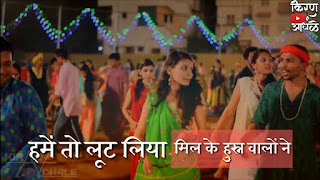 Generally, a Hindi film song is of 3 to 4-minute duration but there are many songs which are more than 6-7 minutes long. The title song in the movie 'Ab Tumhare Hawale Watan Saathiyon' (by the same name) is one of the longest Hindi film songs. The song is around 15 minutes and is shown in a couple of instalments (sung by various singers) in the film.
The most obvious category where most of the songs are typically long is the qawwali. Probably the most famous, and my most favourite, qawwali of all time is the one from Barsaat Ki Raat (1960) - the mother of all filmi qawwalis. Running for more than 12 minutes, the words, the music and the singing all come together brilliantly. Another Qawwalli, Humein to loot liya mil ke husn waalon ne from the film Al Hilal (1958) was of 11 minutes.


Beside Qawwali there are many genres where long songs were created.  There have been several instances in Hindi films where a number of songs that appear separately in the audio releases, are filmed as a single unit i.e as a medley of multiple songs. In some cases, such a medley is used to show the simultaneous state of mind of different characters. Nasir Hussain the famous producer-director of the Golden Era who had this fascination of Medleys to show competition between various characters. Remember the songs of Yadon Ki Baarat, Hum Kisi Se Kam Nahin etc.


Apart from medleys, single long songs have also been used in films to narrate a story. One the longest songs ever filmed in Hindi films is from Rani Aur Lal Pari (1975). The sequence tells the story of Cinderella in the form of a song running for more than 20 minutes. More often than not, such songs are only meant for watching and have virtually no audio-only appeal.

Many films feature really long songs with the primary aim of showcasing the dancing prowess of the lead characters. Such songs typically have long instrumental passages. Here is one song from Raj Tilak (1958) where two exceptional dancers are pitted against each other as a sort of competition.

Similarly, multilingual songs are often used in films to depict national integration and many times, such songs end up being quite long. Like, for example, this song from Pyar Ki Pyaas(1961)…and also from Teen Batti Chaar Rasta (1953) where family members from various regions of India sing praises of their respective regions through a medley of songlets in different languages.

Recently in Half Girlfriend a long song was picturised Phir Bhi Tumko Chaahunga sung by Arijit Singh and Shradha Kapoor. Here I am posting a few songs which are over 8 minutes long.

Posted by /bolywoodfiles.blogspot.com at 10:37:00 No comments: Links to this post