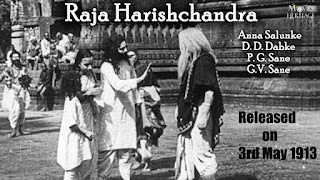 Cinema is immensely popular in India, with as many as 2,000 films produced in various languages every year. Hindi film Industry is the largest revenue earner, the first film released in India was in Marathi by Dadasaheb Phalke but technically the first full-length motion picture in India was Raja Harishchandra also produced by Dadasaheb Phalke.
Only one print of the film was made, for showing at the Coronation Cinematograph on 3 rd May 1913. It was a commercial success. The most interesting point to note that the female characters in the film were played by male actors.
The status of Raja Harishchandra as the first full-length Indian feature film has been debated. Some film historians consider Dadasaheb Torne's silent film Shree Pundalik, released on 18 May 1912, the maiden Indian film. The Government of India, however, recognizes Raja Harischandra as the first Indian feature film.
Phalke hired around forty people for his film studio known as a factory. The film had an all-male cast as no women were available to play female leads Most of the cast did not have any prior acting experience. Phalke ran several rehearsals with the actors even he had to wear a sari himself and act out the scene. 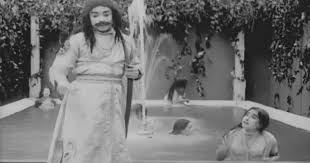 Harishchandra's role was played by Dattatraya Damodar Dabke, Harishchandra's wife Taramti was played by Anna Salunke, who later in 1917 became the first to play a double role in Indian cinema, by playing the roles of both the hero and heroine in Lanka Dahan.
Other artists in the film were Bhalchandra Phalke as Rohitashva,Gajanan Vasudev Sane as Vishvamitra,  Dattatreya Kshirsagar, Dattatreya Telang, Ganpat G. Shinde, Vishnu Hari Aundhkar, and Nath T. Telang
The premiere of the film took place at the Olympia Theatre, Bombay on 21 April 1913 at 9:00 pm. He decided to show the film to a select audience With the favorable reviews generated, Nanasaheb Chitre, Manager of the Coronation Cinematograph and Variety Hall, Girgaon, expressed his desire to screen the film.
The film had its theatrical release on 3 May 1913 at the Coronation Cinematograph and Variety Hall. The show included a dance by Irene Delmar, a comic act by McClements, foot-juggling by Alexandroff, and Tip-Top comic items followed by the film The show's duration was one-and-half hours with four shows scheduled a day at 6:00 pm, 8:00 pm, 10:00 pm, and 11:45 pm. 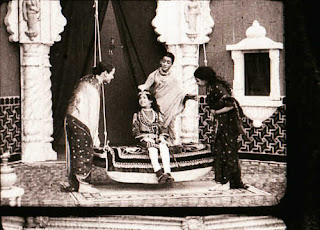 The film had a houseful run for a week, and it was extended for twelve more days. A special show was scheduled for 17 May for women and children only at half rates. Initially, 18 May was advertised as the last show, but the film continued its screening due to popular demand. It screened continuously for twenty-three days until 25 May and was screened at the Alexandra Theatre on 28 June.1913.
News of the film's success in Bombay spread across India and there were demands to screen the film in various locations. As there were no film distributors in those days, Phalke had to move the film, the projector, an operator, and some assistants from place to place.
The success of this film laid the foundation of the film industry" in the country.

Posted by /bolywoodfiles.blogspot.com at 17:11:00 No comments:

The First Indian Fim was Released on 3rd May 1913 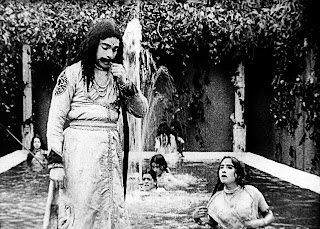 Raja Harishchandra was the First Indian Film produced and directed by Dada Saheb Phalke. It was released on 3rd May 1913 at Coronation Cinema, Girgaon. Bombay though the film premiered at the Olympia Theatre, Bombay on 21 April 1913. It was a Silent Film, it had English, Marathi, and Hindi-language intertitles. The running time of the film was 40 minutes.
An advertisement for the film published in The Bombay Chronicle had a note added at the end that the ticket rates would be double the usual rates. The film had an overfull run for a week, and it was extended for twelve more days. A special show was scheduled for 17 May for women and children only at half rates. Initially, 18 May was advertised as the last show, but the film continued its run due to popular demand. It ran continuously for twenty-three days until 25 May and was re-run at the Alexandra Theatre on 28 June. The Bombay Chronicle in its issue of 5 May 1913 mentioned that "this wonderful drama is splendidly represented by the company of actors" and praised the "beauty and ingenuity" with which Phalke succeeded in presenting the film scenes. 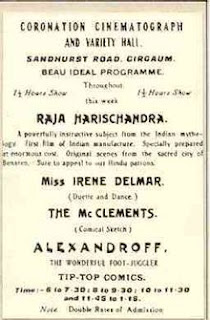 The success of the film in Bombay created a demand from other parts of the country.  As there were no film distributors in those days, Phalke had to move the film, the projector, an operator, and some assistants from place to place.
Due to the film’s massive success, Phalke had to make more prints for rural areas as well. He was established as a producer and later came to be known as ‘The father of Indian cinema.’
The film opens with a scene of tableaux patterned on the painting by Raja Ravi Varma, of Raja Harishchandra and his wife with their son. The film revolves around the noble and righteous king, Harishchandra, who first sacrifices his kingdom, followed by his wife and eventually his children to honour his promise to the sage Vishwamitra. Though, in the end, pleased by his high morals, the Gods restore his former glory and further bestow him with divine blessings
Phalke watched several foreign films to learn about screenplay writing and then completed the script for Raja Harishchandra. The film had an all-male cast as no women were available to play female leads. After coming to the studio, male actors playing female roles were asked to wear saris and do women's chores like sifting rice, and making flour to help Saraswatibai.
Filming was completed in six months and twenty-seven days to produce a film of 3,700 feet (1,100 m), about four reels. Phalke used trick photography to shoot one of the scenes where the god appears and disappears from behind the smoke of sage Vishvamitra's Yajna-kund.

Posted by /bolywoodfiles.blogspot.com at 11:42:00 No comments: 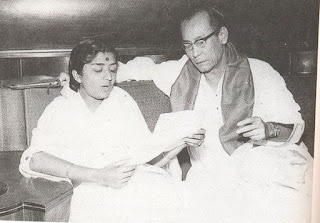 Lataji and Burman Da have done some splendid works and have created marvelous songs.Despite their brief tiff, that had stirred up a huge controversy at the time, both legends got back to working together again after 5 years from 1958 to 1962.These five years SD Burman was none the worse as he continued to give some of the greatest music of his career, now with Geeta Dutt and Asha Bhosle, but he realized he had something beyond, where only Lata Mangeshkar could reach. She also felt that there was something unique in Dada’s music, without which she would remain incomplete. 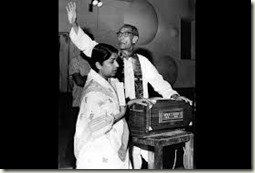 Lata Mangeshkar was his ultimate choice. He often said, “Give me a harmonium, give me Lata and I will make music”.
Lata’s first song for S D Burman was probably in Mashal (1950)

Their second innings led to another set of great melodies in Bandini, Guide, Tere Mere Sapne, Prem Pujari, Talash, Anurag, Abhiman etc which continued till the very end of his career.
It is said that S D Burman called Lata on phone and requested her to sing a song for his son's first film Chhote Nawab in 1961 which she agreed,later R D Burman mediated between both and removed the misunderstanding between them then S D Burman gave her a song in Dr Vidya  1962,their first song after patch up was ‘Pawan diwani’
Song from Dr Vidya 1962

Posted by /bolywoodfiles.blogspot.com at 13:59:00 No comments:

The Trio of Mukesh,Shankar-Jaikishan and Raj Kapoor 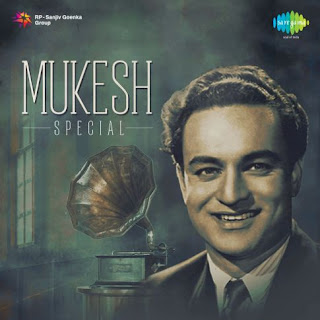 On the 41st Death Anniversary of Mukesh I look back at the Magical Combination of this legendary singer with SJ and Raj Kapoor. Mukesh debuted as (actor-)singer in 1941 with Nirdosh,his association with Raj Kapoor took place in 1949 when he sang for RK in Aag,the song was “Zinda Huwe, Is Tarah Ke Hamen” composed by Ram Ganguli. Raj Kapoor realized that now he found his soul in the voice of Mukesh. In the very next film Barsaat 1950,Shankar Jaikishan made their debut as music director,from this film the trio of Mukesh,SJ and Raj Kapoor formed.After that they gave many immortal songs to Bollywood
.
Barsaat’s music was dominated by Lata Mangeshkar, Mukesh getting two duets with her. But their next venture, Awara (1951), had the title track which became a global sensation making Raj Kapoor-Nargis one of the most recognizable faces abroad, and India’s cultural ambassador.
In the same year, in a non-RK film Baadal, too, SJ created an outstanding solo, Main raahi bhatakane wala hun, and an equally good duet with Lata Mangeshkar, Ae dil na mujhse chhupa. RK-SJ’s next film Aah (1953) didn’t fire up the box-office, but what great songs Mukesh sang! The two solos, Raat andheri door kinara, Chhoti si ye zindagani, and the two duets with Lata Mangeshkar, Jaane na jigar pahchaane nazar, Aa ja re ab mera dil pukara are among the most loved songs for Mukesh fans.
With Mukesh becoming identified as Raj Kapoor’s voice, in almost all the films of Raj Kapoor whether under RK banner or outside, if SJ were the music director Mukesh was almost invariably the voice for him. And every film had great songs remembered till today:Here are some of the immortal songs of this Trio.

The Musical Journey of KISHORE KUMAR 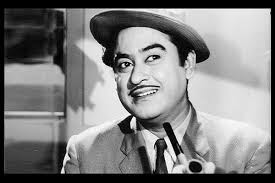 Posted by /bolywoodfiles.blogspot.com at 12:42:00 No comments: 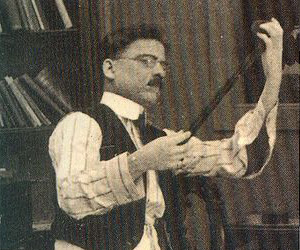 Born on April 30, 1870 at Tryambakeshwar,  was artistic in nature and displayed great interest in the creative arts. He pursued arts for completing his graduation and later took up various jobs such as that of a photographer and a draftsman. He also tried setting up his printing business but closed it down when problems arose with his partner.
The turning point in his life came when he saw a silent film and was deeply moved by its poignancy.He decided to become a filmmaker and viewed it as his mission. His first full length Indian motion picture, ‘Raja Harishchandra’, the most important milestone in Indian cinematic history.For making this movie he had to take loan from his wife,who sold her jwellery for fullfilling her husband"s dream. 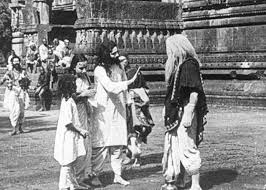 He was a visionary who foresaw the potential of the film medium and also made people realize its cultural and financial worth.His first film Raja Harishchand  was publicly shown on May 3, 1913 at Mumbai's Coronation Cinema. It was an unbelievable experience for public and he received much appreciation for his work The film was a huge success which encouraged many businessmen to produce more films
In his 19 years of film making career, he made 95 movies and 26 short films. His other motion picture works include ‘Rajrishi Ambarish’ (1922), ‘Ram Maruti Yuddha’ (1923), ‘Guru Dronacharya’ (1923), ‘Ashwathama’ (1923), ‘Shivajichi Agryahun Sutaka’ (1924), ‘Satyabhama’ (1925), ‘Ram Rajya Vijay’ (1926), ‘Bhakta Pralhad’ (1926), ‘Hanuman Janma’ (1927), ‘Draupadi Vashtraharan’ (1927),‘Parshuram’ (1928), ‘Sant Mirabai’ (1929) and ‘Kabir Kamal’ (1930).In 1937, he directed his first sound film ‘Gangavataran’ which also proved to be the last film of his career. With the introduction of sound in cinema and the new diversified ways of filmmaking, his work lost admiration and eventually he took retirement from filmmaking.
He passed away on February 16, 1944, in Nashik, Bombay, British India, at the age of 73.In recognition of his lifetime contribution to the Indian cinema, the ‘Dadasaheb Phalke Award’ was instituted in 1969 by the India government. The prestigious award is the highest official recognition for film personalities in India and is presented annually by the president of India for remarkable contribution to Indian cinema. 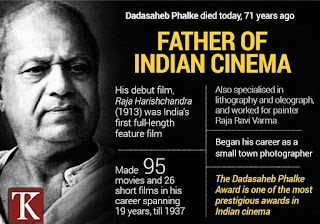