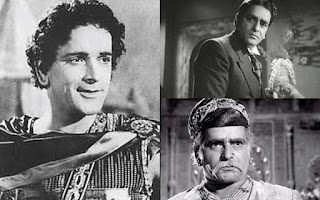 Prithviraj Kapoor( 3 November 1906;– 29 May 1972) started his career as an actor in the Silent era of Hindi cinema and starred in the first Talkie film Alam Ara.He acted as an extra in his first film, Do Dhari Talwar, though he went on to earn a lead role for his third film, titled Cinema Girl, in 1929.His performance in Vidyapati (1937) was much appreciated.His best-known performance is perhaps as Alexander the Great in Sohrab Modi's Sikandar (1941). Our generation know him for his performance in Mughal E Azam.
He began his acting career in the theatres of Lyallpur and Peshawar. Later he shifted to Bombay.There he joined the Imperial Films Company. He also joined the Grant Anderson Theater Company, an English theatrical company that remained in Bombay for a year.Through all these years, Kapoor remained devoted to the theatre and performed on stage regularly. He developed a reputation as a very fine and versatile actor on both stage and screen.
He established Prithvi Theatre in 1944 which staged memorable productions across India. The plays were highly influential and inspired young people to participate in the Indian independence movement and the Quit India Movement. In over 16 years of existence, the theatre staged some 2,662 performances. Prithviraj starred as the lead actor in every single show. One of his popular plays was called Pathan (1947), which was performed on stage nearly 600 times in Mumbai. It opened on 13 April 1947, and is a story of a Muslim and his Hindu friend.
As he progressed into his 50s, he gradually ceased theatre activities and accepted occasional offers from film-makers, including his own sons. He appeared with his son Raj in the 1951 film Awara as a stern judge who had thrown his own wife out of his house.
.His major films include V.Shantaram`s Dahej (1950), Raj Kapoor`s Awaara (1951), Aasmaan Mahal (1965), Teen Bahuraniyaan (1968), Kal Aaj Aur Kal (1971) and the Punjabi film Nanak Naam Jahaaz Hai (1969). He lost his voice while directing a film entitled Paisa, as a result Prithvi Theatre was closed and he even gave up films.
He was also the patriarch of the Kapoor family, five generations of which have played active roles in Bollywood.Karisma Kapoor, Kareena Kapoor and Ranbir Kapoor are his great grandchildren.
He passed away on 29th May 1972. The government of India honored Prithviraj Kapoor with the Padma Bhushan in 1969. For his unparalleled contribution to Indian Cinema, he was posthumously awarded the Dadasaheb Phalke Award in 1971. Prithvi Theatre was later revived in his honor by his son, Shashi Kapoor.

Posted by /bolywoodfiles.blogspot.com at 11:53:00 No comments: