The First KIKI Challenge was originated by Kishore Kumar 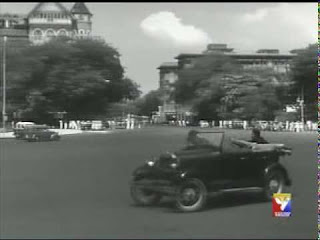 The latest in Social Media is KIKI Challenge(It is dangerous not recommended). Jumping out of a moving car to break into a dance may seem bizarre. But that’s exactly what social media users are doing as part of the latest internet sensation.
People step out of their cars, and dance to the tunes of a Drake track called ‘In My Feelings’ from his latest album ‘Scorpion’. Kiki comes from the lyrics of the song: “Kiki, do you love me?” But it’s not the Canadian rapper who prompted the viral challenge. It was Kishore Kumar who was the original challenger. In the 1959 Hindi film Chalti Ka Naam Gaadi there is a song "Babu Samjho Ishare" we can see the three Ganguli Brothers doing the same but that time it was not a challenge. It was a fun song.
Thousands of social media users across the world are uploading videos of viral KiKi challenge, inspired by Canadian rapper Drake’s song Police across the world have issued warnings against the KiKi challenge as many people attempting the act have received injuries So do not accept this challenge Enjoy the song

Posted by /bolywoodfiles.blogspot.com at 09:52:00 No comments: