On her 112th Birth Anniversary today (14 January 1905), we look at how one of Indian cinema's strongest heroines shaped her career.In the begining of indian Cinema men used to play women in our cinema. When we got real women playing heroines in our films, they were not Indians. Anglo-Indian, Jew or Parsi women were cast. Acting was not a respectable career for women of the soil.She was a woman who came from an elite Maharashtrian family. Educated at Cathedral High School,V Shantaram decided to cast her in Ayodhyecha Raja, a bilingual remake of Phalke’s film in 1932. Incidentally, Khote was chosen to play Rani Taramati, the same role that Salunke(Male) played in India’s first film. The film was a big hit, and launched her career as a heroine. 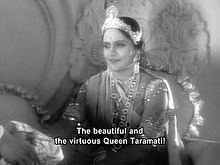 Durga Khote debuted in a minor role in the obscure 1931 silent film Farebi Jaal, by the Prabhat Film Company, followed by Maya Machindra(1932).She broke away from the "studio system" and became one of the first "freelance" artistes of that era by working occasionally with the New Theatres, East India Film Co. (both at Calcutta), and Prakash Pictures.She gave a memorable performance in 1936 film Amar Jyoti.
In 1937, she produced and directed a film titled Saathi, making her one of the first women to step into this role in Indian cinema.The 40s opened for her in a big way, with award-winning performances in Aachary Atre's Payachi Dasi (Marathi) and Charnon Ki Dasi (Hindi) (1941) and Vijay Bhatt's classic Bharat Milap (1942), both of which got her the BFJA Best Actress Award for two consecutive years.

Durga Khote played a wide variety of roles over a career,during later years, she played several important character roles, such as the mother of the protagonist. Her portrayal of Jodhabai, the queen of Akbar torn between duty towards her husband and love towards her son in Mughal-e-Azam (1960) was well received. her other memorable roles as mother were in Charnon Ki Dasi (1941); Mirza Ghalib; Bobby (1973) and Bidaai (1974).  She also ranks among the top ten actresses in mother roles in Hindi cinema,One time she was popularly known as Dev Anand's mother.Her final memorable role was in Subhash Ghai's Karz (1980), where she played the role of the mother of Raj Kiran and later, mother to Rishi Kapoor, who played the role of Raj Kiran's reincarnation after the screen death of Raj Kiran in the movie.
She was an active participant of the Indian People’s Theater Association (IPTA), the left leaning group of writers and intellectuals, and acted in several plays.In 1983 when she was awarded the Dadasaheb Phalke Award, the highest award in Indian cinema.
Durga Khote died on 22-09-1991 at age of 86 in Mumbai, Maharashtra. India.

Posted by /bolywoodfiles.blogspot.com at 14:15:00 No comments: Links to this post