The Immortal Songs of C Arjun 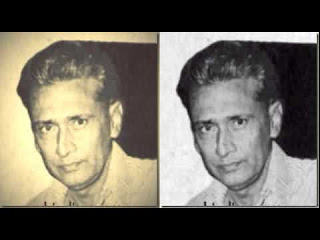 C. Arjun( Born on September 1, 1933, Died on 30th April 1992) is among one of the most talented film music composers in the Hindi film industry. He gave music to 17 Hindi films, besides films in Gujarati, Sindhi and Haryanvi languages. Some of his films were, Main Aur Mera Bhai, Punarmilan, Ek Saal Pehle, Jai Santoshi Maa, Ustad Pedro and Mangu Dada.
His film Susheela-1966, which was incomplete, was completed and released as Subah Zaroor Aayegi in 1977 in which ‘Bemurawwat Bewafa’ song sung by Mubarak Begum and ‘Gham Ki Andheri Raat Mein sang by Talat and Rafi became very popular. One song of his – Paas baitho tabiyat bahal jayegi sung by Rafi is enough to give him immortality. He will always be remembered for the  songs of Jai Santoshi Maa
He inherited his musical talent from his father who was a singer. He became assistant to another Sindhi music director Bulo C Rani. He started his career with composing for a Sindhi film Abana. His first Hindi film was Road no 303 (1960). Off and on he got films under nondescript banners with B/C grade cast. That he created memorable music nevertheless did not do much to change his fortunes. His teaming with the lyricist Jaan Nisar Akhtar would rank at par with the best of Sahir Ludhiyanvi’s composed by SD Burman or Roshan. He also composed a number of non-film songs. He died at a relatively young age of 59 of a heart attack he suffered at a recording studio.

Posted by /bolywoodfiles.blogspot.com at 08:14:00 No comments:

Remember the songs of Jai Santoshi Ma,all the songs of this film were hit.The movie released with Sholay was a super hit.Its songs were liked by all the groups be it young or old,the songs were topping the charts be it Binaca Geetmala or Vividh Bharti.
The music Composer of this movie was C.Arjun,the real name was Arjun Parmanand Chandani born on 1-9-1933 at Karachi Pakistan.Originaly a Sindhi,his family got settled at Vadodara after the partition.His father was a singer,so music was in his genes.Before joining Hindi Film Industry he was assistant to a Sindhi Music Director Bulo C Rani.He started as an independant composer from a Sindhi Film ABANA.
Song from  Road No 303 released in 1960

In 1964 his film Punarmilan released, the immortal song of this film"Paas Beitho Tabeeyat Bahal Jaayegi" sung by Mohammad Rafi gave him recognition in the film industry.The film didn't run but the songs became hit.The songs were Picturised on Jagdeep the famous comedian and Ameeta who were the lead pair.
It was tragedy with this Composer that he was not offered music for big banners so he had to give music to B or C grade movies.His teaming with the lyricist Jaan Nisar Akhtar would rank at par with the best of Sahir Ludhiyanvi’s composed by SD Burman or Roshan.but luck was not in his favour

Gham ki andheri raat mein by Rafi and Talat Mahmood fromSusheela (1966),
In 1966 another immortal composition of this great composer came .Gham ki andheri raat mein by Rafi and Talat Mahmood fromSusheela (1966), lyrics Jaan Nisar Akhtar.This song probably may be one of the last songs of Talat Mahmood.This song bears an uncanny similarity to Sahir Ludhiyanvi – Khayyam composition Wo subah kabhi to ayegi from Phir Subah Hogi.
song from Ustaad Pedro(1971) "chhayi ghata baagon mein"
Before the relelease of Jai Santoshi Ma he gave music in many films like Mangu Dada,Ustad Pedro,Guru aur Chela all these movies were B grade after Jai Santoshi maa he was offered the music of Mythological films.
In 1978 “Nawab Sahib”  was produced by Satnam Rohra and directed by Rajinder Singh Bedi. The movie had Rehana Sultan, Parikshit Sahni, Johnny Walkar, Omprakash, Bharat Bhushan, Farida jalal, Chaman Puri,Tamanna, Ranjeet,Chand Usmani etc in it.If this movie is still remembered today, then the credit should go to the song.This song is sung by Usha Mangeshkar. It is picturised on Tamanna, with Rehana Sultan also present in the picturisation and Parikshit Sahni also visible in the picturisation

How can I not incude the songs of Jai Santoshi Maa This movie was a Super Duper Hit of 1975.Released with Sholay,the music became super hit after its release.

Posted by /bolywoodfiles.blogspot.com at 10:13:00 No comments: