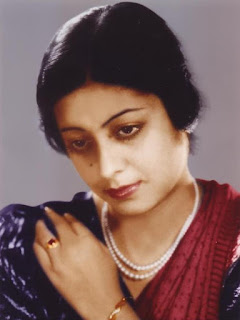 She was among the early singing stars of Indian cinema, and is credited popularly as the first star of Bengali cinema.KANAN has been honored as THE NIGHTINGALE OF BENGAL , by Miss Sandhya Sen, the eminent Bengali journalist. KANAN has been referred to as THE MELODY QUEEN OF INDIA by none other than the queen herself, that is Lata Mangeshkar.


She came in contact with the music maestro Rai Chand Boral who not only coached and familiarized her in the Hindi accent but experimented with many classical Western and Indian forms in his music. She received her initial musical training under Alla Rakha. She was employed as a singer at the Megaphone Gramaphone Company, receiving further training under Bhishmadev Chatterjee.
She worked with the biggest names in Indian cinema from K. L. Saigal, Pankaj Mullick, Pramathesh Barua, Pahari Sanyal, Chabi Biswas and Ashok Kumar.M.P. Productions's Jawaab, was perhaps her biggest hit. Her song Duniya Yeh Duniya, Hai Toofan Mail was well received. She repeated the same feast in Hospital (1943), Banphool (1945), and Rajlakshmi (1946). Kanan Devi's last Hindi film was Chandrashekhar (1948) with Ashok Kumar.

This song when it got released in 1942 was a super hit. In the household both young and old this one was in their lips and outside too. A wonderful creation I should say.The train puffing end is very pleasant and entertaining to the ears, steam engine and the great Toofan mail

KANAN quit film acting in 1959 but continued to be associated with film making as a producer. The films produced by her, mostly based on Sarat Chandra stories anddirected by husband Haridas Bhattacharjee remain assets of the mainstream Bengali cinema.
KANAN's musical talent was first discovered by none other than Kazi Najrul Islam, the rebel poet of Bengal from the notorious Gholadanga area of Howrah. KANAN had already played in two films (JOYDEB and SHANKARACHARYA) as a child artiste and was taken to HMV for her first recording session-her voice still raw without any training worth the name. The record was published in 1929-RECORD NUMBER- P 11580 and the songs : 1) BALO SAKHI BALO TAREY and 2) OGO BOLO KENO SAKHI NAYANA JHAREY. This was KANAN’s only black label record and her name was written as Miss Kanan Bala.

A Non Film song by Kanan Devi
Song from Mukti Sanwariya Man bha gaya
Kanan Devi, as the first lady of the Bengali screen, received many honours for her contribution to Indian cinema. An honorary degree from Vishwabharati, the Padma Shree in 1968 and the Dadasaheb Phalke Award in 1976.
Her greatest achievement was perhaps earning respectability for womenin the industry. She joined films at a time when all actresses came from red light areas of Calcutta. The same was true for Bombay and Lahore. Attempts at introduction of respectable women were done by Dhirendra Nath Ganguly (with his own wife and daughter), Dadasaheb Phalke (with daughter) but the trend was not generalized and films largely depended on social outcasts. KANANs phenomenal rise undoubtedly set a brilliant example of upliftment.
After a long  courtship KANAN married Shri Ashok Maitra, son of the puritan Brahmo leader, Heramba Chandra Maitra.The marriage could take place only after Heramba Maitra’s death. The civil marriage took place on the fourth day of December,1940. Mr P. N. Roy, Mr Anil Chanda were amongst the distinguished guests cum witnesses as required in a registry marriage.Their marriage could not survive in spite of the love and admiration that each had for the other. The marriage ended in a formal divorce and it was mutually decided that KANAN and Shri Ashok Maitra were never to meet again after their separation. 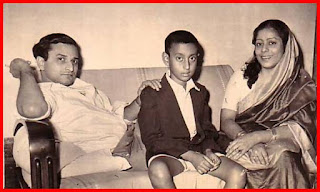 In 1949, KANAN married Haridas Bhattacherjee, who left his job and came to live with his wife at her palatial  Tollyganj Regent Grove residence. KANAN  wanted to be the proud wife of a worthy husband and took him abroad to qualify as a barrister. However, Haridas was not to willing to be a student at that age and finally, considering his literary inclinations, KANAN got her husband a place in her own film production unit SHREEMATI PICTURES as a screenplay writer for Mejdidi. From 1952 onwards, all films of her home production were directed by Haridas Bhattacharjee and he did make a place for himself in the film world of Bengal.
KANAN was in indifferent health condition ever since her first heart attack in the late sixtees. However, she continued to take part in every social function and never failed to turn up at such gathering if she had promised to attend.She died on 17th july 1992 night In spite of the best efforts of the attending doctors, she breathed her last around twenty minutes past ten from Left Ventricular Failure.
Posted by /bolywoodfiles.blogspot.com at 11:18:00 No comments: