Bollywood songs that are about Bungalow or Ghar(House) 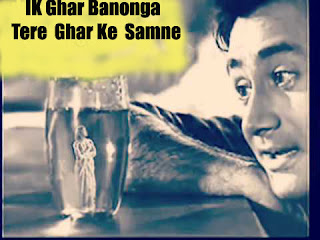 Yesterday I wrote a blog on bungalows of Film stars which was very well appreciated by the readers (more than 2000 visitors visited the blog in one day), this gave me a thought of writing a blog featuring songs that are about Bungalow or Ghar(House)
The most popular "Bungalow" song was K L Saigal's "Ek Bangla Bane Nyara" and the most popular "Ghar" song is "Ek Ghar Banonga Tere Ghar Ke Samne" There are many more songs in Bollywood on this theme. I have selected a few of these great songs.
The first song in my list is the immortal K L Saigal's Ek Bangla Bane Nyara from the film President [1937]. This song was written by Kidar Sharma and composed by R C Boral and Pankaj Mullik.

The next iconic Bungalow song is from the 1958 film Kaala Pani. It was written by Mazrooh Sultanpuri and composed by S D Burman, picturized on Nalini Jaywant and the playback given by Asha Bhosle. This remains one of the most popular and beautiful Mujra-songs ever.

Next Bungalow song is from the 1972 film Samadhi picturized on Asha Parekh, written by Mazrooh Sultanpuri and composed by R D Burman. This song was remixed as "Kaanta Laga" for the T-Series album DJ Doll.

This song dreaming of a Bungalow along with a car with a boyfriend to envy the people. The song was written by Shaily Shailendra, the son of the great lyricist Shailendra and composed by Bappi Lahiri

Let us look into this hit song from the 1968 film "Kismet" sung by Asha Bhosle and Shamshad Begum, written by H S Bihari and composed by O P Nayyar, picturized on Babita and Biswajeet

Now I look into the song on Ghar or house, the first great song comes in our mind is " Ek Ghar Banaonga Tere Ghar Ke Samne" beautifully picturized on Dev Anand and Nutan. This song was written by Hasrat Jaipuri, composed by S D Burman  and beautifully sung by Mohammad Rafi and Lata Mangeshkar

Enjoy this Hit song from the 1954 movie Naukri starring Kishore Kumar, Sheela Ramani, This song was written by Shailendra composed by Salil Chowdhary picturized on Kishore Kumar singing in his own voice.

This iconic song from Awara 1951 deserves a place on this list. In this song, the heroine welcomes home the long-lost lover who has strayed so far but has finally returned. The song was picturized on Nargis.
Sung by Lata, written by Shailendra and composed by Shankar Jaikishan

This philosophical song from Phir Subah Hogi, very well written by Sahir, composed by Khayyam, sung by Mukesh and picturized on Raj Kapoor.

One more “ghar” song, which I think should be included in my list is the song from Kabhie Kabhie – “mere ghar aayi ek nanhi pari. This song was sung by Lata Mangeshkar written by Sahir and composed by Khayyam.Song was picturized on Waheeda Rehman.

Another worth mentioning Ghar song was picturized on Deepti Naval and Farookh Shaikh in the 1982 film Saath Saath. Song was written by Javed Akhtar and sung by Jagjit Singh and Chitra Singh.

Mera Piya Ghar Aaya O Ram Ji" awesome item song picturized on Madhuri Dixit remains one of the best songs of her. Song was sung by Kavita Krishnamurthy from the 1995 film Yaarana. Written by Maya Govind and music by Anu Malik

The last song of this blog is this super hit song  DEKHO MAINE
DEKHA HAI YE EK SAPNA from Love Story movie starring Kumar Gaurav, Vijeta Pandit,, released in 1981. The song is sung by Amit Kumar, Lata Mangeshkar and music is given by R.D.Burman, written by Anand Bakshi

Posted by /bolywoodfiles.blogspot.com at 10:11:00 No comments: