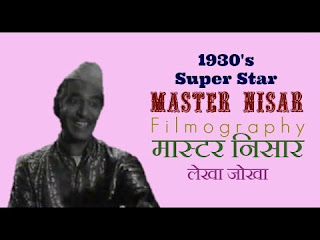 Master Nisar( 5-3-1902 -13-7-1980 ) was the most popular hero of the early talkie films. His ability to speak fluent Urdu and sing songs made him an instant success. He worked in the second Talkie Movie Shirin Farhad (1931), which was super hit. He made a sought-after team with actress Jehan Ara Kajjan.both of them gave many hit movies one after another.
His popularity was immense, people used to flock in large numbers to studios to catch a glimpse of him. It is said that once due to a very large crowd gathered to see him, the Governor of Bengal was forced to divert his car to another road. He was the first actor in the Hindi film industry to own a Rolls Royce car. His heroines were many like Padma Devi, Zebunnisa, Bibbo, Haseena, Sardar Akhtar, Kanta, etc
He also acted in India’s first homemade the color film ‘Kisaan Kanya’ (1937). This was also his last film as a hero. His popularity started to decrease in the wake of the rise of K L Saigal, Ashok Kumar, Surendra etc. After that, he switched to character roles. He appeared in 75 films during his career. The situation came that he would take whatever role came his way. The last time he was seen in the 1971 film Guddi, Those who have seen film ‘Guddi’ (1971), there is a scene in which a lanky, thin person is massaging Om Prakash. Dharmendra tells Guddi, “Do you know who he is? Master Nissar, one time a great actor who was popular and very rich.
In the 50s he was seen in many Qawwalis, He was seen as the on-screen lead singer in the qawwali “Aaj Kyon Hum Se Parda Hai” in the film ‘Sadhna’ (1958). He was also seen in the popular Qawwali '"Na to Karvan ki Talash Hain” from Barsat Ki Raat.
In later years, Master Nisar fell on hard times and was often seen begging near the Haji Ali Dargah, Mumbai. He died in penury in 1980.

Posted by /bolywoodfiles.blogspot.com at 10:51:00 No comments: