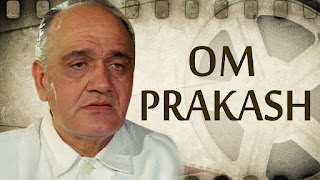 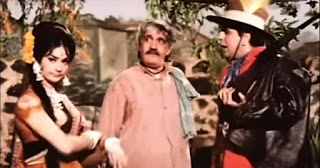 Om Prakash (19 December 1919 – 21 February 1998) was born in Jammu, as Om Prakash Chibber.  Since his career began in 1942, he was a popular supporting actor from the 1950s until the 1980s. He also produced Jahanaara starring Bharat Bhushan, Shashikala, Prithviraj Kapoor and Mala Sinha in the title role of Jahanaara. 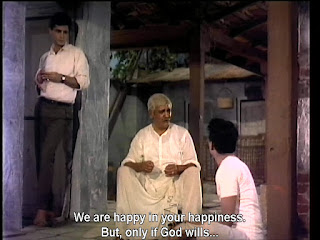 He got his first break as a villain in a film called Lakhpati. It won him acclaim and got him roles in films like Lahore, Char Din and Raat Ki Rani. It was during this phase in his career that he did Azaad with Dilip Kumar, Sargam with Raj Kapoor and Miss Mary, Bahar, Pehli Jhalak, Asha and Manmauji with Kishore Kumar followed by Howrah Bridge with Ashok Kumar and then Tere Ghar Ke Samne with Dev Anand.
In the movie Dus Lakh(1966) he played the role of a misery father of a large family who loses his bearings after he comes into a lottery of 10 lakhs. Om Prakash won the Filmfare Best Comedian Award
Another memorable role played by him was in Buddha Mil Gaya (1971). he played a character of a mysterious millionaire with a vendetta.
Chupke Chupke came in 1975 and is one of the most iconic and incredible performances. He performed as Raghavendra Sharma in a suspicious way. He managed to outshine a peak Dharmendra and Amitabh Bachchan combination. 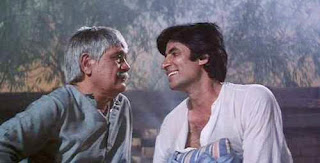 In Namak Halal (1982) he played as the grandfather who goes undercover to check up on his grandson. His role was small but still, his camaraderie with Bachchan remains incredible.
Om Prakash had a special rapport with Amitabh Bachchan and both worked in many successful films from Zanjeer to Sharaabi
Om Prakash suffered a massive heart attack in his home and was rushed to Lilavati Hospital in Mumbai where he suffered another heart attack and went into a coma from which he never recovered. He died on 21 February 1998
Some of the great songs of Om Prakash

Posted by /bolywoodfiles.blogspot.com at 12:04:00 No comments: 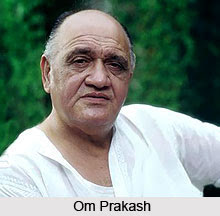 Om Prakash (19 December 1919 – 21 February 1998) was an Indian character actor.He started his career at All India Radio - Lahore, with his famous character "Fatih Din" which was liked through out the Punjb and people started recognizing him with this character.He was paid rupees 25 per month as a salary.
Starting his career in 1944 film Daasi, he was a popular supporting actor from the 1950s until the 1980s. He was one of the elite of the film industry in the '60s, '70s, and to some extent '80s. His pivotal roles in the films Chupke Chupke, Julie, and Buddha Mil Gaya are considered to be among his best along with Daddu in Namak Halaal and De Silva in Zanjeer. He is known for his roles in comedy films. One of his best performances in his later years was Sharaabi (1984), where he played a role that was pivotal for the movie.Om Prakash had a special rapport with Amitabh Bachchan and both worked in many successful films spanning from Zanjeer to Sharaabi. 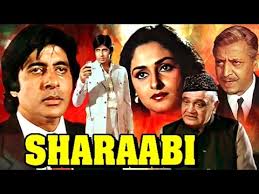 He had developed a style of his own, a style which was going to take him places, make him a big name in the world of film entertainment for the next forty years.He was good in almost every character he played. He was the comedian, the family man burdened with problems, the munshi, the alcoholic fallen on bad days because of the evil designs of the villain, the nagged husband, the old man in love, the wily politician and the big brother with a heart of gold. He played an assortment of characters with the same ease and had some of the best directors vying for him every time they had a role which they felt only he could play. His role in Gopi is still remembered, some analysts think he has overshadowed Dilip Saab.
It was during earlier phase in his career that he did Azaad with Dilip Kumar, Sargam with Raj Kapoor and Miss Mary, Bahar, Pehli Jhalak, Asha and Manmauji with Kishore Kumar followed by Howrah Bridge with Ashok Kumar and then Tere Ghar Ke Samne with Dev Anand. He was marked out for his performance in both films in spite of the presence of powerful star personas like Dilip Kumar, Raj Kapoor, Ashok Kumar, Kishore Kumar and Dev Anand.
He acted in more than 300 films and also produced three films  Sanjog (1961), Jahan Ara (1964) and Gateway of India (1957).
He suffered a massive heart attack in his home and rushed to Lilavati Hospital situated in Mumbai where he suffered another heart attack and went into a coma from which he never came out. He died on 21 February 1998.Here is my Tribute to this Great Actor

Posted by /bolywoodfiles.blogspot.com at 11:41:00 No comments: