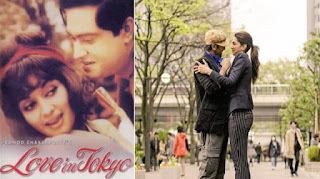 The 2 days visit of Japanese Prime Minister Shinzo Abe in India suddenly stirred my mind of Japanese connection with Bollywood .Let me recollect the FIRST word in Japanese language that I have learnt in my life was Sayonara…. Well, I clearly remember that I was around 12 years old  when the 1966 hit, bollywood movie LOVE IN TOKYO released. The song SAYONARA SAYONARA introduced the first word for me, “Sayonara” which is the Japanese word for farewell. After that not more than 3-4 films were shot in Japan,In this blog I am trying to explore the Bollywood Connection with Japan in these 50 years.

In the last 10 years there were few films that had Japan connection.Rab Ne Bana Di Jodi and Tamasha have a Japan connection, and both films end in Japan.In Rab Ne Bana Di Jodi, Surinder fights with a Sumo wrestler, and wins tickets to visit Japan. In the end, they visit Japan, and we witness one of the best ending credits in a film, when Surinder describes his pictures from Japan. In Tamasha, Ved and Tara went on their first date to a Japanese restaurant. The waitress had offered them different varieties of water. "What a brand, Japan. Companies are the latest countries, and countries hare the latest companies," said Ved. In the end, Ved and Tara meet in Japan at a tea conference where the building's board says Oracle. Japan—a place known for its robotic mechanization, and efficiency. Perhaps, that has something to do with it. While Surinder fights a Japanese wrestler to prove his love, Ved fights his inner demons. In both cases, they are at peace in Japan and have found love in Tokyo.

In 2014 released film Youngistan the song ‘Tanki hai Hum’ from was shot in Japan. It was shot on the streets of Japan in a guerilla fashion, with no formal equipment setting, lights, sets or locations. as you can see from the video, not many Japanese were really aware whether a shoot was actually happening on their streets.
In January 2017 an Indo-Japan collaborative film project Love in Tokyo launched, a cross-culture romance, themed on relationship transcending linguistic barrier, will have an Indian male protagonist and a Japanese heroine. The movie, to be shot almost entirely in Japan, will be co-produced by filmmaker Imtiaz Ali’s Window Seat Films and Japan’s entertainment conglomerate Shochiku with the director’s brother Arif Ali at the helm.
Lets come back to the Bollywood's first Japan connection,The 1966 film Love In Tokyo which was great hit starring Joy Mukharji and Asha Parekh.The film was shot primarily in Japan at locations including Tokyo, Ueno, Ginza, Tokyo Tower, Tokyo International Airport and Hiroshima.
Song from Aman  1967

In Aman starring Rajendra Kumar and Saira Banu the 1957 film had Japan Connection.Meloda (Saira Banu) who was educated in India, speaks Hindi; though she is Japanese. Dr. Gautamdas (Rajendra Kumar) is a UK trained doctor who volunteers to go to Japan to help deal with the horror of the radiation aftermath of Hiroshima and Nagasaki. They meet in Japan and the inevitable happens when hero meets heroine.A majority of the shoot sequences are in Japan
Posted by /bolywoodfiles.blogspot.com at 11:57:00 No comments: