The Most Intimate Love Making Scene of Dev Anand 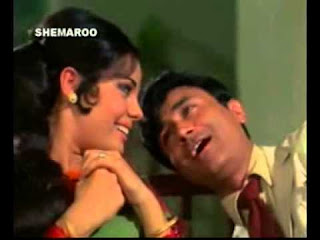 Could you believe that how an Intimate Lovemaking Scene has a touch of spirituality in it? It was made possible by the great Vijay Anand in  1972 film Tere Mere Sapne. The scene was picturised on Dev Anand and Mumtaz who played Husband & Wife in the film.
Vijay Anand told in an interview, " It was one of the most difficult scenes I have ever shot. It was a love scene between my elder brother, Dev Anand, and Mumtaz. I was nervous about explaining the scene to him because I was so much younger. I just couldn't bring myself to tell him my requirements. So I rang up Mumtaz and explained it to her instead. How the wife's health is in danger, how the couple has fought and how the fight culminates in intimate love-making that almost has a touch of spirituality to it.The highlight of this sequence is the song Mere antar ik mandir hai tera hai tera piya,  sung by Lata Mangeshkar played in the background. Though the song is romantic but it appears as a devotional song.
Those who've seen this incredible example of Vijay's creativity will agree that the scene remains a highlight due to Lata's unbelievably sensitive rendition!
The film was based on the “The Citadel” a novel by A.J. Cronin, first published in 1937. Staying clear of a didactic approach, Anand had managed to spin together an engrossing tale of a doctor – Dev as Dr Anand! – and his experience in rural India where he finds medical amenities elementary at best. Here he meets a school teacher played by Mumtaz.who helps Anand in his work.
The two get married too but not all stays fine for ever. On false charges, the doctor is shunted out, and the two have to relocate to Bombay which gives the director an opportunity to throw in a love triangle along the way – utterly forgettable Hema Malini as a big star here.
Dev Anand and Mumtaz seem to share a rare chemistry where they say a lot with their silence, and only a little less with their words.