Vasant Desai-The Talented Music Director who never got his due 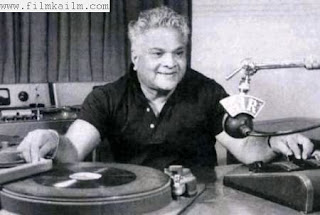 Bollywood film music composer, most remembered for his score in V. Shantaram films like Do Aankhen Barah Haath (1953), Jhanak Jhanak Payal Baaje (1955).He launched the play back singer, Vani Jairam with the song, Bole re papihara in Guddi (1971).Desai created an equally powerful bhajan “Humko Man Ki Shakti Dena” into a nationwide school prayer through Vani’s vocals.
Born on 9th June 1912into a wealthy family in Sonawade village,Maharashtra,started his career with the famous Prabhat Film Company since it started making talkies. He acted, sang, and sometimes composed songs in Prabhat's films like Dharmatma and Sant Dnyaneshwar.
He scored music for a majority of V. Shantaram's films when the latter broke away from Prabhat to form his own film studio.He was one of the leading Music Director of Marathi films.Veteran Marathi film music director and Desai’s creative mentor Keshavrao Bhosle in his memoirs “Maazzhe Sangeet” applauds Desai for many such firsts as well as introduction of echo in sound recording in India
Going through his long and enviable list of songs would be difficult but suffice to say that his memorable songs are valuable gems of musical heritage.Here are some of my favorite.

Posted by /bolywoodfiles.blogspot.com at 11:23:00 No comments: