Rajkumari- The Great Singer of the 40s 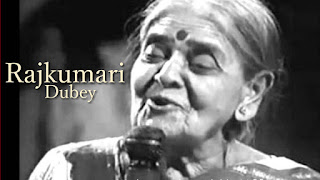 Not many of us remember her today but once she was among the topmost singers of Bollywood. She sang for 100 films, till the early 1950s. She is best known for her songs, "Sun Bairi Baalam Sach Bol Re" in Bawre Nain (1950), "Ghabaraa Ke Jo Hum Sar Ko Takraayan" in Mahal (1949) and "Najariya Ki Maari" in Pakeezah (1972).
She was just 10 years old when she recorded her first song for HMV in 1934 and she started her career as a stage artist. Vijay Bhatt and Shankar Bhatt of Prakash Pictures spotted her during one of her shows.
Her first film with them was a Hindi-Gujarati bilingual called Sansar Leela Nayi Duniya. She got important roles in films like Aankh Ka Tara and Turki Sher (1933). She was the heroine in Bhakt Ke Bhagwan and Insaaf Ki Topi (1934).
She also used to sing for popular music director Lallubhai. He gave music to films starring Rajkumari ji like Nai Duniya, alias Sacred Scandal (1934) (Sansaar Leela in Gujarati version), Laal Chitthi, alias Red Letter (1935), Bombay Mail (1935), Bambai Ki Sethaani (1935) and Shamsheer-e-Arab (1935).
She sang many duets with G M Durrani. The 1942 film Nai Duniya had many duets of Rajkumari and G M Durrani.
Nai Duniya was a 1942 Bollywood film directed by Abdul Rashid Kardar and starring P. Jairaj, Shobhana Samarth, and Mazhar Khan. Suraiya sang her first song; "Boot Karun Mai Polish, Babu" with Naushad as M.D. in this film.
Rajkumari had a soft and very sweet voice with a small range. She sang quite a few songs with Mukesh. She did not get much opportunity to sing with Mohammed Rafi – mainly because Lata Mangeshkar was a fast upcoming singer at the time. She sang with Noor Jehan in Naukar (1943). She never sang with K. C. Dey, but she did sing songs composed by him, as well as his nephew, Manna Dey.
Rajkumari was married very late in life. Her husband was V.K. Dubey who was from Varanasi where he spent a lot of his time (because he owned a shop there), while she settled in Bombay. He later joined her in Bombay. Rajkumari Dubey died in 2000. Her last song was with R D Burman for the 1977 film Kitab.

Posted by /bolywoodfiles.blogspot.com at 10:34:00 No comments: 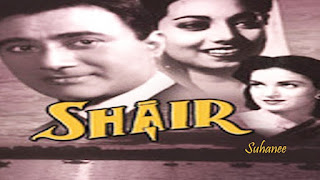 Shayar is a 1949 film. It is a triangle love story between Dev Anand, Suriya and Kamini Kaushal. In the same year, another triangle love story film Andaz was released but the difference was the triangle was between two heroes and a heroine.
The film was written & directed by M S Chawla and produced under the banner of Jagat Pictures. Dev Anand plays a poet who is caught between his childhood sweetheart and a girl from the city who sings his poems on the radio. spends an inordinate amount of time with light comedy in-between by Agha, contrived even by the standards of missed identity farce. would probably rate this higher, just in light of the charming cast and very good music. There are 10 songs in this film, all composed by Ghulam Mohammad and written by Shakeel Badyuni. 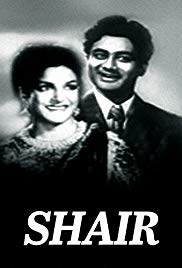 There is a duet sung by Mukesh for Dev Anand.and Lata for Kamini Kaushal