The musical Journey of Kavita Krishnamurthy 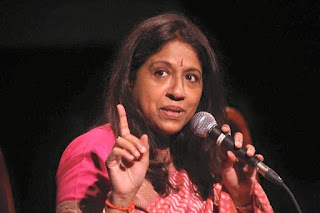 Kavita Krishnamurthy was born in a Tamil Iyer family in New Delhi, India to T.S. Krishnamurthy, an employee of the Education Ministry. She began her music training at the insistence of her aunt, Protima Bhattacharya who enrolled her with Suruma Basu, who taught her Rabindra Sangeet. She began her formal training in Hindustani classical music under Balram Puri, a classical singer. At the young age of eight, Kavita won a gold medal at a music competition. She won many medals participating in the Inter-Ministry Classical Competition in New Delhi in the mid-1960s
Jaya Chakravarty, Hema Malini’s mother, suggested Kavita that she sing for Bollywood and try her luck in filmdom. Though her father was apprehensive initially, yet later Kavita managed to assure him that she would complete her college education first.
She took admission in St. Xaviers’ College, Mumbai. Here she came across Ranu Mukherjee, a singer and the late composer-singer Hemant Kumar’s daughter, who was her classmate. She introduced Kavita to her father. Kavita’s first recording was a Bengali film duet with Lata Mangeshkar in 1971. Hemant Kumar was impressed by her performance and gave her a chance to perform on stage with him. Later she sang with Manna De. She was widely noticed in the TV music show — Aarohi, with Manna De and got chances to do jingles.
After the TV show, Hema Malini's mother took the initiative of introducing Kavita to the music director Laxmikant (one of the composer duo Laxmikant-Pyarelal) in late 1976. Kavita impressed Laxmikant with her extremely strong grasp of Hindustani classical music. Laxmikant gave her an opportunity to work as a dubbing artist.
In 1978, she first sang the Kannada song "Ondanondu kaaladaga" in the film Ondanondu Kaladalli directed by Girish Karnad. This song became a hit and earned fame for Kavita Krishnamurthy. Then she went on to sing many Kannada songs.
She got her solo break in 1980 film Maang Bharo Sajana composed by Laxmikant Pyarelal. In 1985, her career took off with her first major hit, "Tumse Milkar Na Jaane Kyon" from the Hindi film Pyaar Jhukta Nahin (1985) - Tumse milkar.Na Jaane kyun Post the success of the song, it opened up opportunities beyond the Laxmikant–Pyarelal camp. However, "Hawa Hawaii" and "Karte Hain Hum Pyaar Mr. India Se", two popular songs from the equally popular movie Mr. India (1986) - Karte Hain Hum pyaar Mr. India se, roved to be a turning point in her career. (The songs were composed by music composers Laxmikant-Pyarelal, the latter being a duet with Kishore Kumar and lip-synced on screen by actress Sridevi.) Her collaboration with Laxmikant-Pyarelal produced several hits.
The 1990s thrust Kavita into being known as one of the leading female playback singers. In 1994 released 1942 A Love Story which won her much popular acclaim.She went on to work with several music directors of Hindi films of the 1990s, such as Bappi Lahiri, Anand-Milind, A. R. Rahman, Rajesh Roshan, Raamlaxman, Ismail Darbar, Himesh Reshammiya, Aadesh Shrivastava, Nadeem-Shravan, Jatin Lalit, Viju Shah and Anu Malik. Her work with A. R. Rahman and Ismail Darbar remains some of the most critically acclaimed renditions of the last two decades. During her stint as a playback singer, she sang duets with the leading male singers of her times. Early in her career, she sang duets with Kishore Kumar, Mohammed Rafi, and Shailendra Singh. Her most prolific work was with the leading singers of the 1990s: Amit Kumar,Mohammad Aziz, Udit Narayan, Kumar Sanu, and Abhijeet Bhattacharya. She has also sung extensively with younger singers in the 2000s such as Sonu Nigam, Shaan, and Babul Supriyo. Her female duets mostly have been with Alka Yagnik, Anuradha Paudwal and Sadhana Sargam.
She married  to violinist Dr. L. Subramaniam in Bangalore on 11 November 1999, Kavita got extremely selective and cut down on her film singing. She started expanding her artistic range to areas which were never explored. She was the main featured soloist in the Global Fusion album released by Warner Bros. featuring musicians from five continents.
She also lent her voice for many pop and devotional albums. The most prominent ones being: Pop Time
Together Tagore, Athens etc.
Kavita Subramaniam has been making appearances in various music reality shows as a guest judge owing to her popularity as a playback singer.

Song of Khamoshi: The Musical 1997

Posted by /bolywoodfiles.blogspot.com at 12:14:00 No comments: 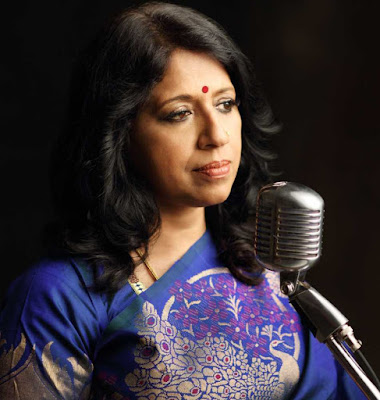 Remembering today on her 59th Birthday as one of the most versatile and technically gifted female singers in the music-reliant Indian film industry.She was born on 25th Jan 1958 as Sharda Krishnamurthy in the South Indian family of Delhi, she came from an artistic background: Her father worked for the Education and Cultural Affairs Ministry, and her mother loved classical Indian music and dance, making sure that Kavita began taking lessons at a young age.
Her Bengali aunt and uncle -- with whom young Kavita spent a great deal of time, to the point where she looked upon them as second parents -- influenced her to learn the Bengali style Rabindra Sangeet as well.
At the age of nine, she got an opportunity to record a Tagore song in Bengali with Lata Mangeshkar under the auspices of the music composer and singer Hemant Kumar. Later on she moved to Bombay when she was 14 to try her luck as a playback singer in the Hindi film industry.
She studied from  St. Xavier's College, Bombay from where she did her BA Honors Economics. She was very active in the St. Xavier's Music Group during her college days. During the annual college festival (Malhar), she met Ranu Mukherjee, the daughter of Hemant Kumar. Ranu took the initiative of reintroducing Kavita to her father.He was impressed by her grounding in music, so he began using her as a singer during his live performances. In one such performance, playback singer Manna Dey spotted her and employed her to sing advertisement jingles. Through her aunt's strong contacts, she met Jaya Chakravarthy, the mother of actress Hema Malini, who later took the initiative of introducing Kavita to the music director Laxmikant (one of the composer duo Laxmikant-Pyarelal) in late 1976.
It was Laxmikant Pyarelal,who gave her first break in hindi films from the film Maang Bharo Sajana, (1980) unfortunately the song was dropped from the final cut of the film.Next year in 1981 she was given a chance to sing a duet with Rafi in a film Ladies Tailor,that got unnoticed.She was getting songs every year in hindi films but her real Break came with Mr India's song "Hawa Hawai" and "Karte Hain Hum Pyaar Mr. India Se" in 1987.
Late 80s and 90s was the era of Kavita Krishnamurthy,she gave many hit songs during this period.Her performance as a singer in the film 1942: A Love Story, composed by R.D. Burman won her much popular acclaim.After that she was a leading Female Singer of Bollywood, Yaraana, Agni Sakshi, Bhairavi, and Khamoshi are notable films in which she gave hit songs.During this period she had tough competition with other female singers such as  Alka Yagnik, Anuradha Paudwal and Sadhana Sargam.
She got married to the famous Violinist Dr. L. Subramaniam in Bangalore on 11 November 1999, after that she got extremely selective and cut down on her film singing.
She  started expanding her artistic range to areas which were never explored. She was the main featured soloist in the Global Fusion album released by Warner Bros., featuring musicians from five continents. Although primarily a playback singer, Kavita has sung with orchestras as a soloist; she collaborated with Western artists from jazz, pop and classical fields.
She won four Filmfare Best Female Playback Singer Awards, including three consecutive awards in the period 1994–1996, and the Padmashri which she received in 2005.
Let's Celebrate her Birthday with enjoying some of her memorable songs.

Posted by /bolywoodfiles.blogspot.com at 11:28:00 No comments: