Amrish Puri - The Mogambo of Bollywood 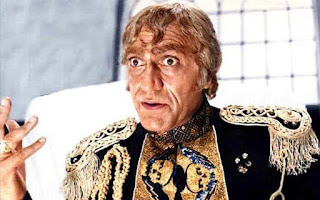 Amrish Puri ( (22 June 1932 – 12 January 2005) best known for his roles in Bollywood. His most memorable character is that of megalomaniac terrorist leader Mogambo in Shekhar Kapur's science fiction film Mr. India. The phrase " Mogambo Khush Hua"became very popular and remains one of the most famous dialogues till date in the industry.His dominating screen presence and baritone voice made him stand out amongst the other villains of the day. He became a popular villian of Bollywood
He also portrayed several positive characters, including his famous role as Baldev Singh in the Indian blockbuster Dilwale Dulhaniya Le Jayenge (1995), a kind-hearted American businessman in Pardes (1997) and a genial grandfather in the film Chori Chori Chupke Chupke (2001).
Very few people know that he failed his first screen test, and instead found a job with the Employees' State Insurance Corporation Ministry of Labour and Employment.Along with his he started taking part in Plays at Prithviraj Theatre.
In 1970 he appeared in his first film, Prem Pujari although the first film he had signed was Reshma Aur Shera which released in 1971. This was followed by many negative or supporting roles in numerous art films such as Shyam Benegal's Nishant, Manthan, and Bhumika and Suraj Ka Satvan Ghoda. His finest and most memorable art film role was Govind Nihalani's Ardh Satya in which he was cast with Om Puri.
He got recognition in 1980 from the film Hum Panchi.
After that, he started getting cast as the main villain in other movies. In 1982, Puri played the main villain, Jagavar Choudhary in the Subhash Ghai super-hit film Vidhaata. That same year, he again played the main villain, JK in the movie Shakti starring two legends- Dilip Kumar and Amitabh Bachchan. Next, in 1983, Subhash Ghai again cast him as the main villain, Pasha in the hit movie Hero. Puri regularly featured in subsequent Subhash Ghai films.

In villainous roles, Puri is best remembered as "Mogambo" in Mr. India, "Jagavar" in Vidhaata, "Thakral" in Meri Jung, "Bhujang" in Tridev, "Balwant Rai" in Ghayal, Barrister Chadda in Damini and "Thakur Durjan Singh" in Karan Arjun. His comic role in Chachi 420, that he acted alongside Kamal Haasan was highly appreciated.Since the 1990s until his death in 2005, Puri also featured in positive supporting roles in many movies. Some of his notable positive roles are Dilwale Dulhaniya Le Jayenge, Phool Aur Kaante, Gardish, Pardes, Virasat, Ghatak, China Gate and Mohabbatein. He received the Filmfare Best Supporting Actor award for Meri Jung and Virasat.

x
Posted by /bolywoodfiles.blogspot.com at 08:38:00 No comments: