Shyama- One of the Busiest Actresses of the Golden Era 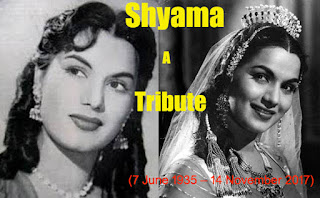 Shyama (7 June 1935 – 14 November 2017) was one of the busiest actresses of the 50s and 60s. She appeared in as many as 80 films, mostly in leading roles. In 1963, she had as many as 18 releases and in 1964 she had 17 releases.
Shyama started her career from the bottom of the ladder but soon worked with the Top Heroes Of Golden Era with Dev Anand in Sazaa 1951, Tarana(1951) with Dilip Kumar, Raj Kapoor in Sharda and with Guru Dutt in Aar Paar.
Many memorable songs were picturized on her, An early song where Shyama first made an impact is the second version of the main love duet, ‘Tu Mera Chand Main Teri Chandni’, from A.R. Kardar’s Dillagi (1949) starring Suraiya and Shyam.
There was magic whenever Geeta Dutt lent her voice for Shyama. This vibrant singer and exuberant actress complemented each other perfectly through several films be it Shrimatiji, Aar Paar, Musafir Khana (1955), or Chhoo Mantar (1956). But if one song truly stood out in their collaboration, it has to be the beautiful ditty from Bhai Bhai composed by Madan Mohan, Ae Dil Mujhe Bata De.
She acted a serious character in Bimal Roy’s Maa with equal ease. Came Shart, another acting triumph of hers. Since then she played all sorts of roles in all sorts of pictures. Her notable films include Chandan, Sharda, Mirza Sahiban, Aar Paar, etc. She topped her acting triumphs by her memorable double role in Do Behnen. Her work in Sharda brought her the 1959 Filmfare award for the best supporting role.
In later years, her memorable roles came in films of Rajesh Khanna such as Masterji and 'Ajanabee (1974 film) and others such as Sawan Bhadon and Dil Diya Dard Liya.
In her long career, she played the lead, second lead, and vamp roles in around 147 films. The last film she did was the Sanjay Dutt starrer Hathyar.
She was married to cinematographer Fali Mistry in 1953. The couple had three children, two sons, Faroukh and Rohinton, and a daughter Shirin. Fali Mistry died in 1979, thereafter she continued to stay in Mumbai.Shyama died on 14 November 2017 due to a lung infection at the age of 82. She is buried at Badakabarastan, Marine Lines.She was given Dada Saheb Phalke Award.

Posted by /bolywoodfiles.blogspot.com at 11:29:00 No comments:

Kumkum - Many Popular Songs were Picrurized on her 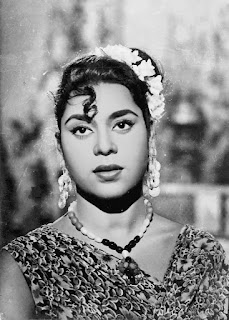 Kumkum was discovered by Guru Dutt. Guru Dutt was to picturise the song "Kabhi Aar Kabhi Paar Laaga Teere Nazar" for his movie Aar Paar (1954). The famous song "Yeh Hai Bombay Meri Jaan" from C.I.D was picturized on her. She showed her dancing talents in the film Kohinoor (1960) with Dilip Kumar. "Madhuban Mein Radhika Nache Re" and "Haye Jaadugar Qaatil, Haazir Hai Mera Dil", sung by Asha Bhosle (1956), sung by Geeta Dutt was picturized on her.
She was paired opposite Kishore Kumar in many films. The songs like "Khoobsurat Haseena" from Mr. X in Bombay, "Sultana Sultana" from Shreeman Funtoosh and "Machalti Hui" from Ganga Ki Lahren, which were picturized on the pair Kishore-Kumkum.
Kumkum(born on 22nd April 1934) born Zaibunnissa, is from Bihar. Her father was Nabab of Hussainabad and belonged to a highly reputed family. She paired with many film heroes of her era and was popular in roles alongside Kishore Kumar. She was the heroine of Dharmendra's debut film"Dil Bhi Tera Hum Bhi Tere"  She was also paired alongside Shammi Kapoor in a side role in Mem Saheb (1956) and also in lead opposite Shammi Kapoor in Char Dil Char Raahein (1959).
She has been a favorite choice for writer-director Ramanand Sagar. Ramanand Sagar decided to cast Kumkum as Dharmendra's sister in Ankhen, a super hit film of 1968. In 1970, for Geet, Kumkum was Ramanand Sagar's choice for a small role. But in Lalkar (1972), she was paired with Dharmendra, while Rajendra Kumar was paired with Mala Sinha. Kumkum was paired with Kiran Kumar in Jalte Badan (1973), produced, directed and written by Ramanand Sagar. She was paired opposite Vinod Khanna in Dhamkee in 1973 and the duet song "Chand Kya Hai Roop Ka Darpan" became hugely popular. She was paired opposite Pran in the comedy film Ek Kuwara Ek Kuwari, directed by Prakash Mehra, which was a blockbuster.
She acted in nearly 115 films in her career.Some of her best known for her roles in Mother India (1957), Naya Daur (1957), Ujala (1959), Kali Topi Lal Rumal (1959), Kohinoor (1960), Son Of India (1962), Ganga Ki Lahren (1964), Shreeman Funtoosh (1965), Ek Sapera Ek Lutera (1965), Raja Aur Runk (1968), Ankhen (1968), Geet (1970) and Lalkar (1972).
Kumkum also acted in Bhojpuri films. Her first film in Bhojpuri cinema was Ganga Maiyya Tohe Piyari Chadhaibo (1963). She left films after her marriage and shifted to Saudi Arab.