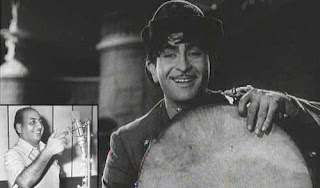 Those old songs are composed of heart touching lyrics which make us feel something real that sometimes makes us feel as the song is composed for our particular situation only.
At the same time, we come across some vulgar and nonsensical lyric songs, which made you hate the new songs! During old days also, some nonsensical songs are portrayed on the movie but because of their poor quality, we don't even remember them.
Come to think of it, the lyrics of most popular Hindi songs make absolutely no sense but we can’t seem to get over them. Remember ‘Jab tak rahega samose mein alu, tera rahunga o meri Shalu’? Of course, you do.
Prepare yourself for more of these. Trash lyrics are the future.

1 Lara lappa lara lappa layi rakhda  Ek Thi Ladki, 1949.  This timeless hit from the late 1940’s is one of the very few songs that features Mohammad Rafi with his idol, GM Durrani. You can hear Rafi in the chorus. GM Durrani was India’s first male professional playback singer. Rafi modelled his voice after him, in his early days. The female lead voice is that of Lata Mangeshkar.

2. Shin Shinaki Boobla Boo this song was sung by Lata and Chitalkar from the 1952 film Shin Shinati Boobla Boo. This meaningless title was written by P L Santoshi the great Director of that era.

3. Ramaya vastavayya … Shree 420, 1955.  Another classic from the black-and-white era, Shree 420 dealt with the chronic issue of corruption in our society. The movie was a runaway success and each song in it was a hit.

The lyrics were by Shailendra, regarded as one of the finest songwriters of his time. He heard the Telugu phrase ‘Ramaya vastavayya’ in the folk songs of migrant labourers in his neighbourhood, and used it in this evergreen hit.
Song from Shree 420, 1955.

6.Timbaktu  Another popular song of its time from Jhumroo, showcasing Kishore Kumar in a different avatar.

7 Bakkamma bakkama yekada pathoda … Shatranj, 1969.
Rendered by Rafi and Sharada, this wacky dance number performed by Mehmood (who else?) and Helen was the highlight of an otherwise forgettable spy thriller.

8.Goyake chunanche … Manoranjan, 1974 film directed by Shammi Kapoor, Manoranjan was a spicy comedy with Zeenat Aman and Sanjeev Kumar in the lead. Unlike other Indian movies, Manoranjan depicted prostitution as a fun activity, with the heroine openly enjoying herself with several men. No wonder the movie was generally panned by serious film critics. But the lay public (like me) enjoyed watching it all the same, and this wacky item song topped the charts.

The lyrics were penned by Anand Bakshi. Apparently, the phrase Goyake chunanche is from Urdu.

remember this song because of Poonam Dhillon in a wet, tight, green monokini, rather than its lyrics! Poonam Dhillon was a Yash Chopra discovery and Trishul, directed by him, was her debut film. She made quite an impression with this one song, written by Sahir Ludhianvi. That led to her lead role in Chopra’s very next venture, Noorie, the movie that made her a big-time star.

16 You are my chicken fry

Posted by /bolywoodfiles.blogspot.com at 09:43:00 No comments: