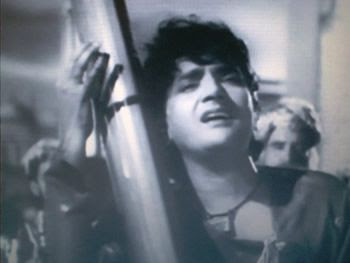 It is difficult to imagine any other actor in Bailju Bawra other than Bharat Bhushan,he  may have never been a swashbuckling hero, but he was just right as the sensitive, suffering poet-musician in several hit musicals in the fifties and sixties.Remember the films Baiju Bawra, Mirza Ghalib, Basant Bahar, Kavi Kalidas, Barsaat Ki Raat and Sangeet Samraat Tansen where he portrayed an artiste who was at odds with a cruel world but still retained a song on his lips.
Bharat Bhushan was born on 14 June 1920 Meerut, Uttar Pradesh. He did his studies and took a graduate degree from Aligarh. After this he took to acting against his father's wishes. He began his career in his early twenties, with a supporting role in the controversial Chitralekha (1941).
He had to struggle for over a decade to make a mark in Hindi movies till Baiju Bawra (1952), which gave him instant stardom and legendary status along with Mohammad Rafi, Meena Kumari and Naushad Ali.
Riding the crest of success, the star-director team of Baiju Bawra collaborated once again for Shri Chaitanya Mahaprabhu (1953), for which Bhushan bagged the Filmfare Best Actor Award,Sohrab Modi's Mirza Ghalib (1954) saw Bhushan playing a poet (the eponymous Ghalib) whose wife and lover were played by Nigar Sultana and Suraiya respectively; in Basant Bahar (1956), he played a singer once again.
His list of leading ladies included Meena Kumari, Nargis and Nutan. His well-liked pairing with Madhubala began with his cameo in the Madhubala-centric Gateway Of India, escalated with the success of the musical, Phagun, and reached its peak with Barsaat Ki Raat.
The 1960s began well for Bhushan with Barsaat Ki Raat and the ensemble hit, Ghunghat (opposite Bina Rai), but there were several younger heroes on the scene now. In 1964, his ambitious colour starrers like Jahan Ara (opposite Mala Sinha) and Dooj Ka Chand (opposite B Saroja Devi) failed.He swiched to character roles,his stint as the older man began on a hopeful note with Rajshri's Taqdeer (1967), but the film failed.He played father role of Shashi Kapoor in Pyar Ka Mausam (1969) .
Realising his acting days were drawing to a close, Bhushan planned to direct a film with Manoj Kumar and Vyjayanthimala in the late 1960s  Dooj Ka Chand, but the project fell through.
Bharat Bhushan died on 27 January 1992,he was reportedly in a dire financial state.even after enjoying status of star struggled lot in his old age and was found travelling in a local train also.My Tribute to this Legend of the Golden Era.

Song from Gateway Of India 1957