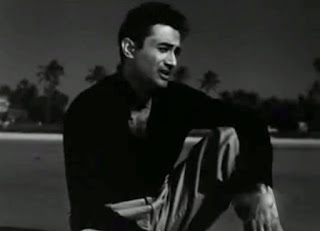 We all know Dev Anand for his light-hearted songs, especially his being totally at home with his heroines in duets, but, he was also outstanding in melancholic roles. In this blog, my effort is to give you not just the best sad songs of Dev Anand but also some philosophical songs also. In 1956 his film Funtoosh was released. the film had many funny songs in it but the most popular song was Dukhi Mun Mere,Sun Mera Kehna sung by Kishore Kumar was a sad song.
The first sad song of Dev Anand was Marne Ki Duwayen Kyun Mangu from 1948 film Ziddi which was Kishore Kumar,s First film song.Another sad song was sung by Mukesh for him in the 1948 film Vidya "Bahe Na Kabhi Nain Se Nir " I am posting this song especially for Dev Anand's fans who have not heard Mukesh singing for him.
In the 1963 movie Sharabi (Drunkard), Dev Anand excelled himself in a melancholic role.The movie had some of the saddest songs of Dev Anand; eg, ‘Mujhe le chalo phir aaj us gali mein’, ‘sawan ke mahine mein’ and this number: Kabhi Na Kabhi, Kahin Na Kahin, Koi Na Koi To Aayega’. Lyrics are by Rajinder Krishan who wrote the maximum lyrics for Madan Mohan and music is by the latter.

Another sad song was sung by Mukesh for him in the 1948 film Vidya "Bahe Na Kabhi Nain Se Nir " I am posting this song especially for Dev Anand's fans who have not heard Mukesh singing for him.

The next year in 1955 another sad song became popular from House No 44, the song was sung by Hemant Kumar. When you are a fan of senior Burman dada, Hemant da and Dev saab then this song is pure heaven.

Kala Paani was released in 1958, it gave Dev Anand the first Filmfare Award for Best Actor Its  song Hum Bekhudi Mein Tumko Pukare sung by Rafi is a great song.

Bombai Ka Babu was released in 1960 the song Chal Ri Sajni Ab Kya Soche sung by Mukesh is one of the best sad songs of Mukesh but this song was played in the background so I am not including this The other sad song of this film is Saathi Na Koi Manzil sung by Rafi. A master voice and what a beautiful composition by SD Burman....hats off.

I shall do grave injustice if I don’t choose this number in the top sad songs of Dev Anand from 1963 movie Kinare Kinare in which Dev Anand acted opposite Meena Kumari.   This song is sung by Manna De. Though there is a very beautiful song .jab gam-e ishq satata hai to has leta hoon’. sung by Mukesh. This song was not picturised on Dev Anand instead Chetan Anand lip-synched this song

The 1965 movie Guide is regarded as a classic, the best of Dev Anand. It was directed by Vijay Anand and starred Waheeda Rehman opposite Dev Anand. Din Dhal Jaye and  Kya Se Kya Ho Gaya are two beautiful songs by Rafi I am including Din Dhal Jaye

What a mesmerising lyrics by Neeraj,. What a touchy voice of Kishore Kumar and above all Music Composer by S D Burman Ji This song of Gambler 1971 is a sad song of Dev Saab

As late as in 1973, Dev Anand sang on the same theme in Joshila. The movie was directed by Yash Chopra. In this film Dev Anand is imprisoned for a murder that he didn’t commit but it was pinned on him by the evidence of the same witness whose life and honour he had tried to save. The movie, therefore, opens with this song by Dev Anand in the prison. The combination of Sahir, SD Burman and Kishore was the most abiding combination for Dev Anand. Enjoy the song: Kiska rasta dekhe ai dil ai saudaayi, Meelon hai khaamoshi, barson hai tanhaayi…