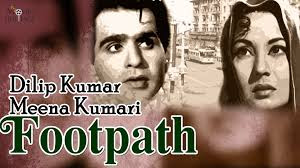 This film was released in 1953. The film was a flop but the film earned critical acclaims for Dilip Kumar's Performance. Dilip Kumar in an interview said "My scene of breaking down after my elder brother Bani passes away remains my all type favourite scenes"

The film stars Dilip Kumar, Meena Kumari, and Anwar Hussain. The music of the film is by Timir Baran and Khayyam. The highlight of the film is One of the finest Ghazals "Sham e Gham Ki Kasam by Talat Mahmood. 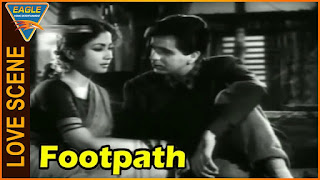 Tired of being poor, Noshu(Dilip Kumar), a newspaperman, abandons his scruples and starts to make money as a black marketeer. He gains his fortune but ruins his brother's life causing him to lose his job, his home and his wife whilst simultaneously losing his own self-respect and that of his former neighbours and his girl. Tormented by his conscience, he writes an expose′ of the illegal trade, but cannot prevent his own brother becoming a victim when an epidemic rages unchecked because criminals have stockpiled all the medicine.
Meena Kumari performs very convincingly matching Dilip Kumar’s intensity in every scene. She never appears vulgar during her bathing scene. Romesh Thapar is restrained and Achla Sachdev tries hard to appear heartless. Anwar Hussain does not impress too much. The other actors are just adequate. 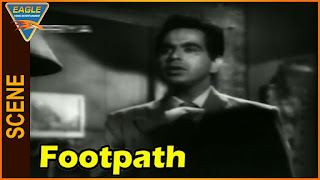 A taut screenplay and meaningful dialogues penned by Zia Sarhadi make “Footpath” a truly memorable film. Sarhadi showed a lot of promise and eye for detail. The sequences shot indoors as well as in the black-marketing den shot in natural light sans cinematic jugglery by N. Raiaram is really convincing.
Songs of Footpath