The Story Behind the Song "Dum Maro Dum" 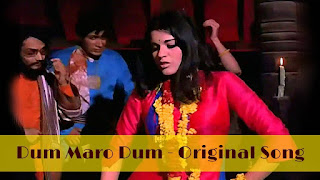 This super hit song was once an anthem of the Indian young generation. To hear ‘Dum Maro Dum’ blaring over loudspeakers was a part of growing up in the 1970s. The job of composing music for ‘Hare Rama Hare Krishna’ was first offered to Sachin Dev Burman but he hated hippie culture and turned down the offer. But his son R. D. Burman was of a different opinion and decide to grab this opportunity. After this song, R. D. Burman became the new mega-composer of Bollywood.
Actually ‘Dum Maro Dum’ was supposed to be a duet between Usha Uthup (singing for the bad girl) and Lata Mangeshkar (singing for the good girl). But at the end, they were both checked off the list and Asha Bhosle ended up singing the song solo.
The song topped the Binaca Geetmala annual list 1972. In Binaca Geetmala, a song could appear for a maximum of 18 weeks, after which it was called a Sartaj Geet. On 15 March 1972, Dum Maro Dum became a Sartaj Geet while it was at #1 payddan (position). It had remained at #1 position for 12 weeks.
Dev Anand wanted some peppy music before his song "Ram Ka Naam Badnam Na Karo" R D Burman sat with Anand Bakshi and asked him to give him few words before starting the song Ram Ka Naam Badnam No Karo. It was Anand Bakshi who used the old phrase Dum Maro Dum Mit Jaye Gum as Mukhda for this song, R D Burman immediately made a tune which was liked by all his musicians. So he asked Anand Bakshi to complete the full song on this tune. 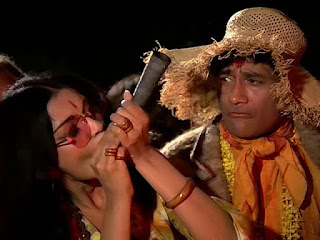 The song came out to be marvellous, everybody was convinced that it will become a craze. In fact, Dev Anand was scared of this song, he was worried that this song will overshadow his song Ram Ka Naam Badnam Na Karo. RDB suggested to him that they will keep this song only on the disc. After a few days, Dev Saab decided to picturise this song on Zeenat Aman but kept a small version of this separately in the film.
The song presented the lyricist Anand Bakshi as a versatile lyricist and shaped his career. It also boosted the composer Rahul Dev Burman's career. Bhupinder played the guitar for the song. Charanjit Singh played the distinctive drone of the transichord that opens the song.
This song has been remixed and sampled by a number of artists. It has also been included in many compilations.British DJ, San-j Sanj has used the infectious guitar hook and created a dance track featuring Natty A called "So Real So Right". DJ Ritu and Bally Sagoo compiled the song for their collection The Rough Guide to Bollywood in 2002. In 2004, the hip-hop artist Method Man sampled the song in his third album Tical 0: The Prequel, for the track "What's Happenin'" featuring Busta Rhymes.
Here is the original song along with many cover  versions of this song

The Beatles of Bollywood

Robin and The New Revolution