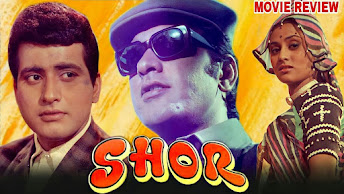 Released on 15th September 1972, Shor is a beautiful collage of emotions.  A tale of a father and son coping after a tragic accident, and how their misfortunes affect them.The film was written, produced and directed and edited by Manoj Kumar, who also plays the lead role in the film.

The highlight of this film is its music, composed by Laxmikant-Pyarelal.  “Ek Pyaar Ka Naghma Hai”, written by Santosh Anand and sung in different versions by Lata Mangeshkar and Mukesh. It plays throughout the film, and retains its chartbuster status till date. The other songs, like “Jeevan Chalne Ka Naam” and “Paani Re Paani” stand out for their sheer brilliance.

Manoj Kumar who plays Shankar loses his wife Nanda in an accident. She dies while saving her son (Deepak). , Deepak loses his voice. Shankar contacts doctor to get his son's voice again; however, doctors suggests him to undergo surgery to get his son's voice back. Shankar  He has no money for the surgery,he tries hard to collect money and finally is able to collect enough money. Deepak undergoes the surgery successfully. Shankar goes to work; however, is unable to focus properly while working with machines and eventually gets injured. The injury causes him to lose his hearing. The father is now unable to hear his son's voice when he regains it.There is communal harmony with the stereotyped Muslim, Khan Badshah and a medley of workers that include a Sikh and a Christian.  Many characters introduced to provide a few laughs for the front benchers, notably Meena T, Manorama, Asrani and V.Gopal, fail to add any fizz.

Jaya Bhaduri’s portrayal of Raat Ki Rani is average but Satyajeet who plays Deepak is outstanding. Nanda, in a cameo, is the soul of the film.

If you liked this Blog, you would also appreciate my Youtube Channel, the link is given below
https://youtu.be/CG7YsjiCAKU
Posted by /bolywoodfiles.blogspot.com at 08:16:00