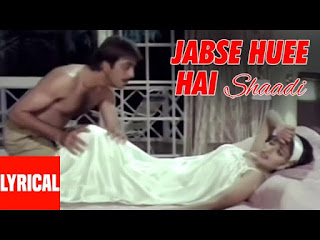 Like majority of the population, I have always believed that music and lyrics complete each other. No matter how soulful music is if lyrics are not good,  a song can never make a lasting impression and vice versa. Shaadi and Biwi are such words on which lot of funny songs were written and still being written.In this Blog I have selected  few of these songs showing how life changes after marriage, or how they are fed up with their wife, etc -
The first song comes in my mind is from Ladki (1953) acted and sung by Kishore Kumar