Usha Uthup - A Journey from Night Club to Bollywood 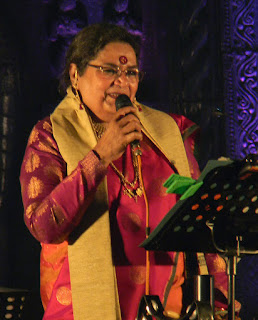 Usha Uthap( 8th Nov 1947) came in at a time when people thought that ladies' voices should be pretty and gentle. She became the first female Pop Singer of India. She started her singing career as a Night Club singer in Madras. After that, she began singing in Calcutta at nightclubs such as "Trincas"
I was in my teens when I listened to her very popular song "Scotch and Soda".Those days she was known as Usha Iyer and she used to sing cover versions of many popular songs. In 1968, she recorded covers of two pop songs in English, "Jambalaya" and The Kingston Trio's "Greenback Dollar", on an EP. Her deep husky resonance roused the passions of a million young hearts
https://youtu.be/Io2a0jnwYTI

No one expected a woman in a saree singing in a nightclub but that was the fact. People were surprised to see a typical South Indian Girl singing Pop Songs. After Trincas, her next engagement took her to Delhi where she sang at the Oberoi hotels. Here in Oberoi Hotel once Shashi Kapoor and few unit members of Navketan heard her singing the English songs and were influenced with her unique voice.
As a result, she started her Bollywood career with Ivory-Merchant's Bombay Talkies (1970) in which she sang an English number under Shanker-Jaikishan and then Hare Rama Hare Krishna. Originally, she was supposed to sing Dum Maro Dum along with Asha Bhosle for Hare Rama Hare Krishna. However, as a result of internal politicking on the part of other singers, she lost that chance but ended up singing an English verse.
Uthup sang several songs in the 1970s and 1980s for music directors R D Burman and Bappi Lahiri. She also reprised some of R.D. Burman songs that were sung by others such as Mehbooba Mehbooba and Dum Maro Dum and popularised them to a distinct end.
She has 200 albums under her belt and soundtracks for 150 Hindi and regional films. She has sung French, Spanish, Italian, Swahili, Zulu, Russian, Creole, Hebrew, Sinhala and Chinese.
Usha married Jani Uthup, who was her fan in Kolkata. The couple has a daughter, Angeli and son, Sunny. The diva is a grandmother now