Raga Based Songs of Kishore Kumar 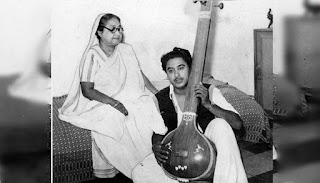 We all know that Kishore Kumar never received any typical classical training yet proved with every song that he was in no way lesser than any of his contemporaries of the ‘Golden era’.
During his earlier career as an actor, not many opportunities came his way to sing songs based on classical ragas. Even there were many occasions when the music directors chose to have him lip-sync to Mohammed Rafi and Manna Dey as they were classically trained and so these music directors felt that Kishore Kumar may not do justice to the particular songs based on classical ragas.
In this post I bring to you some memorable Kishore Kumar solos based on different ragas.
The first song in my list is Koi Humdum Na Raha Koi Sahara Na. This song was originally composed by Khurshid Minocher-Homji, better known as Saraswati Devi, the first female composer of Bollywood, and sung by Kishore’s elder brother Ashok Kumar in Jeevan Naiya (1936). However, 25 years later, Kishore da crooned this melody based on Raag Jhinjhoti for his film, Jhumroo.