SHAILENDRA - Lyricist of all Genre’s 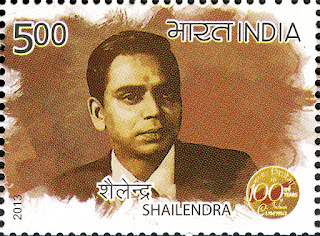 Shailendra was a rare lyricist for whom there was no other life beyond lyrics.He was a complete lyricist in all genre’s of lyricism: serious, funny, spiritual, romantic, sad, happy and angry. . Gulzar called him the greatest lyricist in Hindi films. He was associated with not only with Shankar-Jaikishen but also with a number of music directors such as Salil Chowdhury and SD Burman.
His father hailed from Bihar. This U.P. – Bihar cultural influence was to show later in his folk-style film songs. The origins of Chadh gayo paapi bichhua, Sajanwa bairi ho gaye hamar and Ab ke baras bhej bhaiya ko babul  thus can be traced to this family back-ground.
He was born in Rawalpindi, and brought up in Mathura. He came in contact with Indra Bahadur Khare at the Kishori Raman School. Both started composing poems, sitting on the rock located on the bank of a pond near to Mathura Railway Station
In 1947 he moved to Bombay and started his career as an apprentice with Indian Railways in Matunga workshop.His writing continued during that period also.
He used to recite his poem in Kavi Sammelans,in one such Sammelan Raj Kapoor heard his poem Jalta hai Punjab, he was so influenced by this poem,he thought of taking this poem in his upcoming movie AAH(1948).He approached  Shailendra to buy this poem which Shailendra refused because that time selling their poems was not  good morally.However Raj Kpoor gave him an open offer to write for him.
As you know the life of a writer is always tough,Shailendra was also living that life.During those days Shailendra's wife got pregnant he needed money that time Shailendra himself approached Raj Kapoor in need of money. At this time, Raj Kapoor was filming Barsaat (1949), and two of the film songs had not yet been written. For ₹ 500, Shailendra wrote these two songs: Patli kamar hai and Barsaat mein. Thus the filmy career of Shailendra started.The song "Barsaat mei hum se mile"started a new trend of title songs.This was started by Shailendra,after that he wrote the title song Awara Hoon for Awara which became a huge hit,
Normally, in Raj Kapoor movies in which Shankar Jaikishan have directed music and composed songs on the lyrics of Shailendra and Hasrat Jaipuri, there is always a title song. For example, I In fact the trend was started by him with Barsaat song. The Awara’s title song Awara Hoon was penned by Shailendra, which was the biggest international hit ever.
Although other contemporaries like Majrooh, Sahir, Kaifi, Shakeel, Jan Nisar Akhtar were regarded as poets who drifted from literature to film songs, Shailendra was generally thought primarily as a lyricist. His sheer diversity of thought is quite unique. Some of his songs are romantic (‘Yeh raat bheegi bheegi’, ‘Tere mere sapne’), some metaphysical (‘Wahan kaun hai tera’, ‘Zindagi khwab hai’, ‘Sajan re jhoot mat bolo’, ‘Jao re Jogi’) others of longing (‘Aja re Padesi’, ‘Oh jaanewalae ho sake’, ‘O basanti pawan pagal’) anguish (‘Kya se kya ho gaya’, ‘Dost dost na raha’, ‘Sajanwa bairi ho gaye’), abandon (‘Mud mud ke na dekh’, ‘Suhana Safar’, ‘Aaj phir jeene ki’), or even nonsensical (‘Tin kanastar’, ‘Chuhe mama’).
Shailendra became popular because he used to write in simple words.He  wrote in the common man’s language. He was economical in his use of words, yet his writing was very meaningful. Take for instance, Teesri Kasam’s Sajan re jhooth mat bolo. he  penned lullabies, bhajans, love songs and even item numbers with equal ease and panache,he was gifted with supernatural quality of writing any stuff of any genre.
In 1961 Shailendra invested heavily in the production of the movie Teesri Kasam (1966), directed by Basu Bhattacharya and starring Raj Kapoor and Waheeda Rehman. The film won the National Film Award for Best Feature Film. However, the film was a commercial failure.The falling health resulting from tensions associated with film production and anxiety due to financial loss, coupled with alcohol abuse, ultimately led to his death,he died on 14th December 1966.
The Milestone Songs of Shailendra