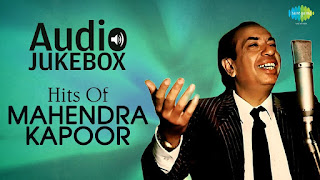 He was one of the pillars of the Golden Era of Hindi Music, he had his own style of singing and was different from other singers of his time. Mahendra Kapoor had a very large vocal range, and he is sometimes known as The Vibrant Voice of India. He was the first Indian playback singer to record music in English. He was asked by the group Boney M to sing their songs in Hindi with Musarat from Pakistan, which resulted in the Pop Album M-3.
Mahendra Kapoor (9 January 1934 – 27 September 2008) was an Indian playback singer. Best known for the song MERE DESH KI DHARTI from Upkar.He started his career as a playback singer in V. Shantaram's Navrang in 1958, singing Aadha Hai Chandrama Raat Aadhi, under the musical direction of C. Ramchandra.
At an early age, he was inspired by singer Mohammed Rafi but he started learning classical music under classical singers like Pt. Hussanlal, Pt. Jagannath Bua, Ustad Niaz Ahmed Khan, Ustad Abdul Rehman Khan and Pt.Tulsidaas Sharma. He is perhaps most notable for lending his voice to actor Manoj Kumar in most of his films, mainly in the patriotic genre of music.He was a favorite singer for B R Chopra's films. Some of the films of BR Chopra camp were Dhool Ka Phool, Gumrah, Waqt, Hamraaz, Dhund and NikaahHe sang in a large number of Indian languages and was the playback singer who has performed in the largest number of in Gujarati, Punjabi, Bhojpuri and Marathi movies. He also performed the title song for the TV series Mahabharat. In Marathi, he was very popular for being the voice of Dada Kondke in all his movies. In spite of being associated with Dada Kondke's colloquial style, his singing for Marathi movies was not limited to Dada Kondke's movies only.
.He remained a respected and popular figure across his five-decade cinema career. During his singing career, he sang more than 2500 songs in various languages.In 1972, he was awarded the Padma Shri by the Government of India.On 27 September 2008, Kapoor died following cardiac failure. He was survived by his wife, children, children-in-law and grandchildren.