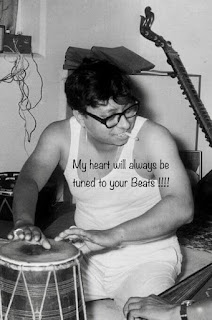 From a very young age, he started taking an interest in music. When he was nine years old, R. D. Burman composed his first song, Aye meri topi palat ke aa, which his father used in the film Funtoosh (1956). The tune of the song Sar jo tera chakraaye was also composed by him as a child; his father included it in the soundtrack of Guru Dutt's Pyaasa His father sent him to learn instruments from the great maestro of that era. In Mumbai, he was trained by Ustad Ali Akbar Khan (sarod) and Samta Prasad (tabla). He also considered Salil Chowdhury his guru. He served as an assistant to his father and often played harmonica in his orchestras.
When he was in his teens, he was signed as an independent music director by none other than Guru Dutt for a film starring himself and Waheeda Rehman. The lyrics of this Guru Dutt and Waheeda Rehman-starrer film were written by Shailendra. Burman recorded two songs for the film before it was shelved. The first song was sung by Geeta Dutt and Asha Bhosle, and the second one had vocals by Shamshad Begum. Unfortunately, the film couldn't be completed, he had to wait for 2 more years.
When the noted Bollywood comedian Mehmood decided to produce Chhote Nawab, he first approached Burman's father Sachin Dev Burman for the music. However, S. D. Burman declined the offer, advising he was unavailable. At this meeting, Mehmood noticed Rahul playing tabla, and signed him as the music director for Chhote Nawab.
His first hit film as a  music director was Teesri Manzil (1966). Nasir Hussain the producer of this film  went on to sign R D Burman and lyricist Majrooh Sultanpuri for six of his net  films including Baharon Ke Sapne (1967), Pyar Ka Mausam (1969) and Yaadon Ki Baaraat (1973). Burman's score for Padosan (1968) was well received. Meanwhile, he continued to work as his father's assistant for films including Jewel Thief (1967) and Prem Pujari (1970).
He was always lookout for new and different sounds. A lot has been written about R D Burman creating sound from various sources, like a broom and a comb, a glass hit by spoon, blow wind into a bottle or beat the table or the human back. It is not important to create that sound, in my mind the genius is to apply that sound into music and make it part of the melody.
In Padosan song Mere Samne Wali Khidki Mein the beginning sound was created by rubbing Comb with a grooved pipe. The same sound again was used in "Chingari Koi Bhadke" from Amar Prem Song.

In the "Mehbooba Mehbooba" song from Sholay (1975), the song begins with the sound he created by blowing from his mouth into half-filled cold drink bottles. Nobody before or after him has had these ideas.

Similarly, the sound from a bottle was used in the Warrant song "Ruk Jana O Jana", watch this video.

He created a different sound by a school bell dipping in a bucket full of water, Watch the above song "Yeh Din To aata Hai Ek Din Jawani Mein" from 1983 film Mahan.
Song from Mahan 1983

R D was very fond of new and different types of musical instruments.He introduced Thumba to Bollywood, Pancham and his group had gone for some shows in Africa. There they saw this African Instrument called Tumba. This triggered Pancham and thus he brought TUMBA to India. The legendary TUMBA played in “Aya Hoon Main Tujhko Le Jaunga” from Manoranjan is a classic example of his rhythmic playing.  In the film Jawani Diwani in the song "Samne Yeh Kaun Aya", he invented an instrument called Pedal Matka to produce a different sound. watch this video below.