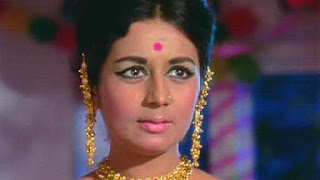 Nanda(8 January 1939 – 25 March 2014) started her career in films as a child artist. It was her father who took her in his film Mandir (1948). While making the film her father expired, the film was completed by Dinakar Patil. After her father's untimely death, she decided to do films besides attending the school. First, she did Jaggu (1952) as a child artist in which Shyama was playing the heroine. In 1954 she did Jagadguru Shankaracharya. In the same year, she did Angaray directed by K.B. Lal that starred Nargis and Nasir Khan
V Shantaram took her as a leading actress in her film Toofan Aur Diya released in 1956. But after that, she was offered roles of sister or side roles in many films. Dev Anand took her in his sister's role in Navketan's Kala Bazarin 1960 with a promise he would cast her heroine in his next film. It was in Hum Dono released in 1961, she was one of the heroines in that film.
After Hum Donobig banners started approaching her with good offers. Nanda went on to rule the screen space from 1960 till 1973 with Nutan, Waheeda Rehman, and Sadhna. Some of her most memorable roles were in 'Jab Jab Phool Khile', 'Gumnaam' and 'Hum Dono'.She was once again one of the heroines in Dev Anand's Teen Deviyan.
In 'Jab Jab Phool Khile', Nanda played her career's first westernized role and paired up with Shashi Kapoor with whom she went on to do eight films.
She worked with Rajesh Khanna in 'The Train' when he was just starting out as an actor. She also worked with him in Ittefaq and Joru Ka Gulam.
Manoj Kumar took her in Shor released in 1972. She made a brief return to acting in 1982 as a character actress where she played the onscreen mother of Padmini Kolhapure in 'Ahista Ahista', 'Mazdoor' R K Films Prem Rog
Nanda was nominated for Filmfare Award five times for her performance in Bhabhi (1957), Aanchal (1960), Ittefaq (1969), Ahista Ahista (1981) and Prem Rog (1982).
She won Filmfare Best Supporting Actress Award for 'Aanchal'