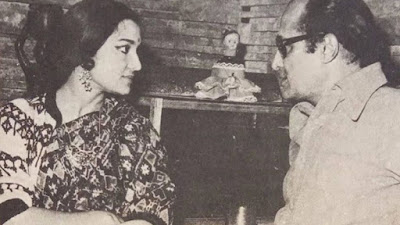 Nasir Hussain (16 November 1926 – 13 March 2002),  started his career as a story writer in 1948. He remained there till he started his own Nasir Hussain Films and turned producer-director. He made musical hits like Jab Pyar Kisi Se Hota Hai (1961),

Pran was also a constant villain in Ziddi, Love in Tokyo, Paying Guest and Phir Wohi Dil Laya Hoon. He also collaborated with writer Sachin Bhowmick, comic Wasti, and editors Babu Lavande and Gurudutt Shirali in many of his films

Here are a few songs of his films of RD & Majrooh Sultanpuri combination.