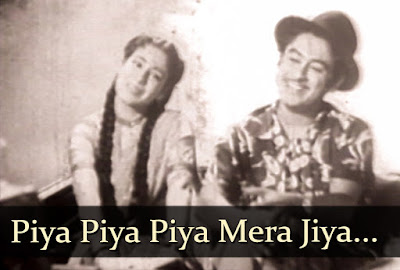 This song appears in the 1955 hit musical comic Baap Re Baap directed and produced by A R Kardar. The movie starred Kishore Kumar, Chand Usmani. This song is a duet of Kishore Kumar and Asha Bhonsle, written by Jan Nisar Akhtar, and the music was composed by O P Nayyar.

During those times, there were no digital recording facilities like today, where if there is a mistake it can be rectified by computers. Those days there used to be only one microphone for the singers, and another for musicians. If the singers want to record a duet, one would sing his/her line, get away noiselessly for other singers to sing, and come again for their own part. And, if a musician makes a mistake, the whole track would be recorded again from the top. There was also no technique to alter the intensity of sound, if the sound was supposed to come from a distance, the singer had to stand away from the mic, slowly advancing towards it, to get the desired effect.

This song is significant in that Asha Bhonsle made a mistake in the middle of the song and late Kishore Kumar went ahead with the mistake in the song, without going for a retake. When the song was being recorded, Asha Bhonsle gave an alaap a second time, when it was not required. Kishore Kumar signaled her to go on and complete the song as it was. After the recording was over, he told everybody that he, being the hero of the movie, would place a hand on his heroine’s mouth, when that particular shot in the song would come. That was how the problem was resolved.

This song was picturized on Kishore Kumar and Chand Usmani on a Ghoda Gadi (a horse carriage). Watch this song video at 2:09 minute of this video, how brilliantly Kishore Kumar covers up the mistake made by Asha Bhonsle  She started singing the part which was to be done by Kishore Kumar. But then she stopped abruptly. The music director wanted a second recording. But Kishore Kumar denied of recording the second time and as he was the hero of the film he did a cover up of that part by closing her mouth. What a genius! Kishore Kumar the legend.

Song of Baap Re Baap 1955
If you liked this blog, you would also appreciate my Youtube channel Bollywood Unplugged the link is below
https://youtu.be/tcAAE7QwScA