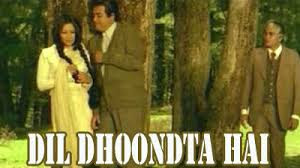 This song from Mausam(1976) was written by Gulzar, composed by Madan Mohan, and sung by Bhupinder. The song has two versions, one a solo by Bhupinder and a duet of Lata Mangeshkar with Bhupinder. The solo was used during the titles of the film and the duet was picturized on the young Sanjeev Kumar and Sharmila Tagore.

The solo version happens to be Gulzar's favorite, is by far the soberer and serene. The duet has a faster tempo. Both versions have three stanzas with different interludes. The Mukhada was taken from a Ghalib ghazal with a slight change. In the ghazal, it is 'Jee Dhoondta Hai', Madan Mohan changed it to Dil Dhoondta Hai., since it worked better for the metre. 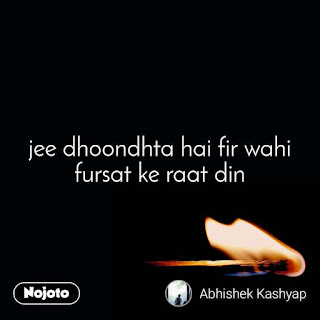 This wasn’t the only time Gulzar was inspired by Ghalib. He went a step further in the song Satrangi Re, (Dil Se, 1998), in which he wove Ghalib’s couplet into his lyrics, crediting the source by its name.

This song is the pivot around which the film revolves. It connects the characters in time. the first time when the Doctor(Sanjeev Kumar) is traveling from Calcutta to Darjiling by road where he met Chanda decades ago.

Gulzar in a book told that while composing the interludes of the song Madan Mohan was strolling between his music room and his kitchen. He(Gulzar) had gone to his house for dinner. Madan Mohan was a good cook, he was cooking mutton at that time. During that duration, he composed the tune of this song.

Gulzar was one of the contenders for the National Award for that year. Unfortunately, no award was given to any lyricist that yeat. Similarly, he was nominated for Filmfare's Best lyricist award but lost out to lyricist Sahir Ludhianvi for Kabhie Kabhie.

Madan Mohan had a habit of making 5-6 tunes of one song, he then selects the best out of them. For this song too he made 6 tunes one of which was later used in Veer Zara (2004). Here a clipping is given below, you could see his versatility