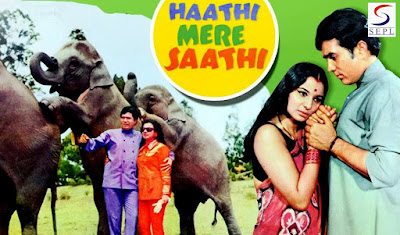 Haathi Mere Saathi was the highest-grossing Indian film of 1971. It was released on 1st May 1971 and became an instant hit all over India. It was not a children's film but became a craze among children. Children's cinema was a rarity in the 70's decade which was dominated by action dramas. But one big exception was "Haathi Mere Saathi"(1971), directed by M.A.Thirumugham which was inspired by his own Tamil hit, "Vettaikkaaran"(1964).

This was the first film of Salim Javed as an independent script & screenplay writer. it was the biggest hit in the career of Rajesh Khanna as a hero. This movie is about the relationship/bondage between man and animal. Elephants play an equally important role with Rajesh Khanna in the movie and the movie revolves around them. Tanuja playing the heroine also contributes.

In an interview, Tanuja said, "I showed them the film when Kajol was six and Tanishaa around three years old, and for two weeks Kajol did not speak to me!! "Mummy, you killed the elephant! Because of you, he had to die!" screamed Kajol! "And Tanishaa was annoyed too!"

Another highlight of the film was its music by Laxmikant Pyarelal who have composed some great hits for this movie sung by Kishore Kumar. One song by Mohammad Rafi is a class.

The film ranks as a classic because it is still unequaled as the complete family fare in its genre for kids of all ages!. If you have not seen this film, you must see this film with your children.