Vasant Desai - His Songs have become the part of our life 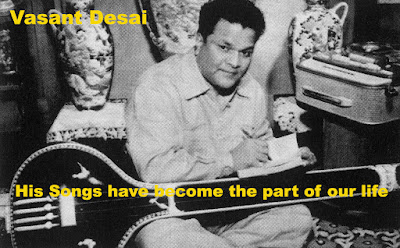 Vasant Desai (9 June1912–22 Dec 1975) used to say“I don’t care. I don’t make songs for Binaca Geetmala [or] for sales or popularity. I make it for my character and that particular situation in my film as conceived by my director. People will remember my songs because it will become part of their life."

He was groomed by V Shantaram. At the age of 16, he wanted to be an actor, so he came to Kolhapur and one of his uncles took him to Shantaram at Prabhat.Studio. He was kept as an office boy. Young Vasant's job was to take chits in for Shantaram. For about eight months, he worked without pay. He was given a few acting roles in Marathi films. He also sang a few songs in the films and gave the background music in many Marathi films. V Shantaram gave him 'Shakuntala'(1943) as an independent music director. His compositions like  Ae Malik Tere Bande Ham from Do Aankhen Barah Haath and Hum Ko Mun Ki Shakti Dena from Guddi(1971) have become permanent prayer in schools

His songs enjoy a cult status in Maharashtra with “Ghanshyam Sundaraa” occupying the top slot. Amey opines, “Desai’s smooth transitions from mukhdas (openings) to antras (stanzas) and the use of the chorus is an absolute delight.” Listen to his evergreen Rafi-Lata duet “Sabko Pyar Ki Pyaas” (“Pyar ki Pyaas”) or Hemant-Lata’s “Nain so Nain Nahee Milaao” (“Jhanak Jhanak Payal Baaje”)
Devoted to V. Shantaram from his Prabhat days, Desai went along with the maestro when he broke away from Prabhat to form his own Rajkamal Studios. Scoring music for a majority of Shantaram’s films, Vasant’s career suffered a major blow when their relations soured in the late 1950s. Yet it is to his credit that even though they split after the recording of “Aadha Hai Chandrama” (later re-done by C. Ramchandra), he never ever spoke ill about “Anna” till his dying day.
Going through his long and enviable list of songs would be difficult but suffice to say that his memorable songs are valuable gems of musical heritage.
Song of Do Aankhen Barah Haath (1953)
Song of Jhanak Jhanak Payal Baaje (1955)
Song of Toofan Aur Deeya (1956)
Song of Gunj Uthi Shehnai (1959)
Song of Aashirwad 1968
Song of Guddi 1971