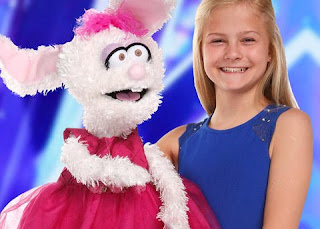 Last year Akshay Kumar was hosting a comedy show on TV. He was so impressed with a comedian-ventriloquist that the actor himself decided to master the art. We know Ramdas Padhye is India’s one and only Professional Ventriloquist, Puppeteer and Puppet maker who has performed his widely acclaimed ventriloquial and puppetry acts in India and abroad. He was seen in the Hindi film Mahaan released in 1983. 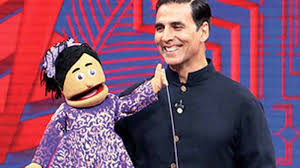 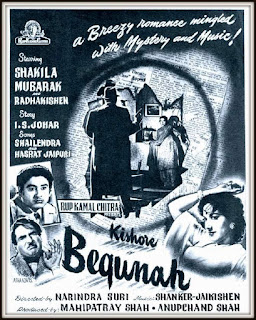 Speaking of ventriloquism as an art, our Hindi films have rarely shown appreciation for the art. Begunah would have been one of the very first films to have it in the core plot. it featured Kishore Kumar as the lead, in a never-before comic role. The film was said to be an exact copy of Paramount's international hit "Knock on Wood" (1954) starring Danny Kaye (a huge influence on Kishore da). The story of BEGUNAAH was written by I.S.Johar. The Directors who were Businessmen from Saurashtra, Gujarat were held Guilty on TWO COUNTS for Plagiarism & violation of Copyright. Within 2-3 days of the Movie’s release, Danny Kaye, Hero of the Hollywood Movie KNOCK ON WOOD’ had come to Bombay for some work & was informed about this Movie. He watched the Film and though he could not follow Hindi, Danny got an idea that much of the Movie has the same story as his Movie. He immediately contacted Paramount Picture in America. Next day their lawyers came to Bombay and with the help of local solicitors, they filed a case in the Court seeking a Ban on the Movie and destroying all Negatives & Prints. Much to the surprise of the Indian Film Industry and the local Lawyers, within a Month, the Verdict was announced. 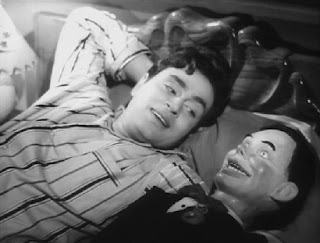 Another Hindi film was Rajendra Kumar's 'Akeli Mat Jaiyo' had a cameo of a talking doll (performed by Yashwant Padhye, the father of ventriloquism in India). The highlight of the film was its song Chal Chal mere Dil. The picturisation of this song shows Rajendra Kumar with a puppet. Rajendra Kumar sings this song in Mukesh’s voice and the puppet too responds- in Johny Whisky’s voice. Majrooh Sultanpuri is the lyricist. Music is composed by Madan Mohan 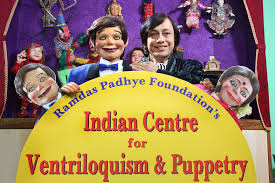 In the mid-70s and 80s.Ramdas Padhye was very popular. In 1982 Amitabh Bachchan saw his performance and immediately got Ramdas Padhye on board for his forthcoming film Mahaan, as after watching the action, he wanted to perform the ventriloquism act on Screen and got "talking-doll" part incorporated in the plot of Mahaan. Apart from Padhye's, there was Master Madhu, a music director of silent & vintage era of Indian films, who used to perform with Talking dolls onscreen. 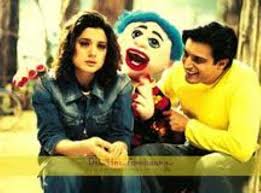 In 2002 a film Dil Hai Tumhaara  had a character of a Ventriloquist. It was directed by Kundan Shah starring Rekha, Preity Zinta, Mahima Chaudhry, Arjun Rampal, Jimmy Sheirgill and Alok Nath.
Jimmy Sheirgil played a role of Ventriloquist who is accompanied by a puppet called "Rangeela", who was operated by renowned ventriloquist and puppeteer Ramdas Padhye.

Puppets have been part of many Indian films but this is different from Ventriloquism. The first song in my memory was from “Sargam” (1950), it was a comedy song. This song was picturised on Raj Kapoor, Rehaana and others.
Another famous and most popular use of puppets was in the song from Chori Chori 1956. This song begins as a puppet show where two puppets resembling the hero and heroine are seen dancing. Soon they are seen transforming into the real-life Hero and Heroine who sing this lovely duet. It is sung by Lata and Manna Dey. Shailendra is the lyricist whereas Shankar Jaikishan created the wonderful music.
"Kathpulti" (1957), The film's story was about young Pushpa, an accomplished dancer and singer, who assists puppeteer Shivraj in his puppet show. Pushpa comes from a poor family and is a good dancer and singer. She would like to assist a puppeteer with his makeshift dolls and puppet act. Unfortunately, he meets with an accident and is hospitalized. Some of his puppets were also damaged during this accident. Pushpa approaches Loknath for work, and he gets her to work on stage. The film stars Vyjayanthimala and Balraj Sahni in the lead. The film's music was composed by the Shankar Jaikishan duo, with the lyrics penned by Shailendra and Hasrat Jaipuri. The most famous song sung by Lata in this film "Bol Ri Kath Putli"
Here I would like to recall my viewers about a hit song sung by Kishore Kumar from the film Kasauti released in 1974. In this song, Pran uses Finger Puppets throughout the song.