O Nigahen Mastana – the most romantic songs ever created by any music director. 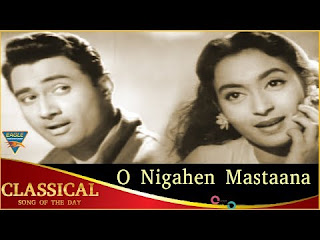 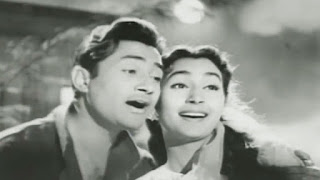 One of the most marvellous experiments that Sachinda carried out was in the song O Nighahen Mastana (Paying Guest -1957). It is a duet of Kishore Kumar and all Asha Bhosle does in it is hum. And how! Not only is the humming exquisitely melodious, the performance by Nutan to emote that humming is so real that many people thought she had done it herself!
The unique thing about this song is that when the second Antara gets over, the interlude music and the lights start fading out till the music can be hardly heard. While the remaining lights dim out, the third Antara is sung in a softer tone:

Basti ke diyon ko bujh jaane de,
Lehraake na ruk-ruk jaana,
Chaahat ka labon pe na aane de,
Yehi pyaar ka hai zamaana
Watch the song video carefully. As these lines are being sung, the heroine closes her eyes and starts daydreaming. No sooner is the last line over, the music stops and there is a momentary silence, with Nutan moving forward, expecting to be kissed. That is when Dev Anand playfully shakes Nutan by her ears, bringing her out from her reverie. And now, the music and Kishore’s singing both pick up with a bang in the third Antara. What a great example of composing a song frame by frame. Watch minutely after 3.0 minutes you will find the efforts of S D Burman for making this song immortal.
This was the first film of Nutan with Dev Anand and what a chemistry was seen in this song as if they know each other very well.
What a romantic effect this creates! No wonder girls used to swoon and fall in love with Dev Anand.
It is one of the most romantic songs ever created by any music director.