The Musical Journey Of Asha Bhosle 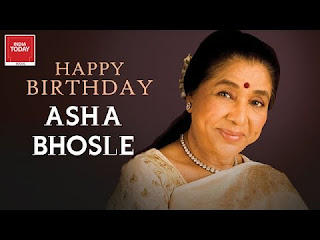 Asha Bhosle(Born on 8th Sep 1933) is world's most recorded artist. She had sung over 12,000 songs, she was officially acknowledged by the Guinness Book of World Records as the most recorded artist in music history. She sang her first film song '"Chala Chala Nav Bala" for the Marathi filmMajha Bal (1943).
Her Hindi film debut when she sang the song "Saawan Aaya" for Hansraj Behl's Chunariya (1948). 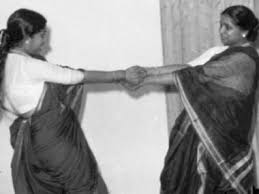 Asha and Lata
Initially, she sang songs in low budget B- or C-grade films. She used to get the assignments only when reputed female singers of that time like Geeta Dutt, Shamshad Begum, and Lata Mangeshkar refuse singing for the bad girls and vamps, or songs.  Her earliest songs were composed by A R Qureshi, Sajjad Hussain, and Ghulam Mohammed, and most of these songs failed to do well. The first time she sang in a big banner film was in Bimal Roy's Parinnta 1953 The song of that film  "Gore gore haathon me mehandi racha ke"..but none of the songs was picturised on the heroine of the film Meena Kumari.
Another big banner film was RK Films Boot Polish in 1954,  Raj Kapoor signed her to sing "Nanhe Munne Bachche" with Mohammed Rafi. 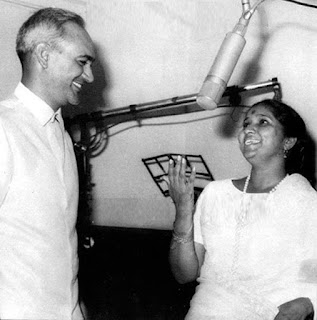 It was O. P. Nayyar gave Asha a break in CID (1956). For the first time, she sang for a heroine in Big banner.The song O Leke Pehla  Pehla Pyar is basically sung by Mohammad Rafi and Shamshad Begum but in the second version, Asha sang for Shakeela the heroine of the film. After that O P Nayyar took her in  B. R. Chopra's Naya Daur (1957),  Her duets with Rafi like "Maang Ke Saath Tumhara", "Saathi Haath Badhana" and "Uden Jab Jab Zulfein Teri", penned by Sahir Ludhianvi, earned her recognition. It was the first time she sang all the songs for a film's leading actress. In 1957 another hit film released  Tumsa Nahin Dekha and the song Dekho Kasam Se Kahate Hain Tum Se became another hit that year.
In 1958 came Howrah Bridge the song "Aaiye Meherbaan" picturised on Madhubala was super hit. With this film, she established her status and received the patronage of such composers as Sachin Dev Burman and Ravi whom She sang for his first movie Vachan (1955). The melodious lullaby from the movie Chandamama Door Ke! became an overnight hit among young mothers in India.
Sachin Dev Burman and his favourite singer, Lata Mangeshkar, were not on good terms from 1957 to 1962.During this period, S D Burman used Asha as his lead female voice. She and Burman gave many hit songs in movies such as Kaala Pani, Kaala Bazaar, Insaan Jaag Utha, Lajwanti, Sujata and Teen Deviyaan (1965).In 1958 Kaala Pani she gave voice to Madhubala once again recall the duet song "Achcha Ji Main Haari Chalo Maan Jaao"
In the 1960s she was among the top singers, In fact, when Geeta Dutt was in her bad phase due to family problems she took place of her and became No 2 after Lata. The song "Ab Ke Baras" in Bimal Roy's Bandini (1963) consolidated her position as a lead singer.  With O P Nayyar she gave hit songs in  Ek Musafir Ek Hasina (1962) and Kashmir Ki Kali (1964). Recall the songs "Main Pyaar Ka Rahi Hoon" (Ek Musafir Ek Haseena), "Deewana Hua Baadal" and "Ishaaron Ishaaron Mein" (Kashmir Ki Kali). Mere Sanam, another great hit of 1965, has several beautiful songs sung by Asha and composed by Nayyar. Jaayiye aap and Yeh hai reshmi zulfon ka andhera. Both solos present two distinct emotions. Asha does full justice to both. The former is a haunting love number while the latter is a seductive one.
With Ravi she gave hits from  Gumrah (1963), Waqt (1965), Hamraaz (1965), Aadmi Aur Insaan (1966)
In 1966, Bhosle's performances in the duets from one of music director R.D. Burman's first soundtracks, for the movie Teesri Manzil, won popular acclaim. Reportedly, when she first heard the dance number "Aaja Aaja", she felt she would not be able to sing this westernised tune. While Burman offered to change the music, she refused, taking it as a challenge. She completed the song after ten days of rehearsals, and "Aaja Aaja", along with such other songs as "O Haseena Zulfonwali" and "O Mere Sona Re" (all three duets with Rafi), became successful. She went on to record a variety of songs with him – cabarets, rock, disco, ghazals and classical.
Madan Mohan, another composer bewitched by Lata, keeps aside a challenging song for Asha from time to time. How can one forget the enchanting and seductive Jhumka gira re in Mera Saaya (1966)? Though Lata sang the hit title song, Asha's formidable rendering of Jhumka gira re made it a chart-topper too.
. Asha has another highly popular seductive number, Parde mein rehne do, in Shikar. The 1968 film, with Shankar-Jaikishen's music, runs more than 50 weeks in Mumbai, and is one of the biggest hits of the 1960s 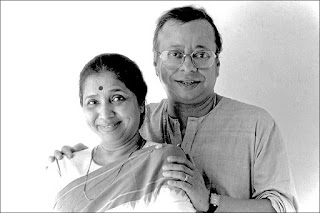 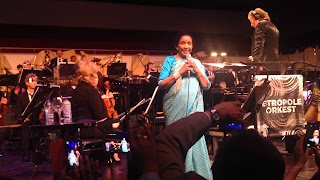 In the 1980s, she travels across the US, Canada and Britain to give concerts that draw thousands of South Asians. Unlike other singers, including Lata Mangeshkar who remains stiff, she moves around. Her concerts are always lively.In 1981 she scales epoch-creating heights with the Rekha-starrer Umrao Jaan (1981). Khayyam's soft, lingering songs like In aankhon ki masti mein and Dil cheez are among the best film songs ever composed.
By the mid-80s Asha was not singing enough.With the rise of singers like Anuradha Paudwal and Alka Yagnik, her career starts sliding but she simply cannot be written out. RD burman was also not getting films.RD reinvents his and Asha's career with an astounding score in the 1987 Gulzar film Ijaazat. The hauntingly sad song Mera kuch samaan sounds sadder by Asha's passionate rendering.
The 1990 film Lekin is produced by Lata and her brother Pandit Hridaynath Mangeshkar. The film, whose score is composed by Hridaynath, sees Lata singing more numbers. But Asha also gets an opportunity to transform the intricate song Jhoote naina into a masterpiece.
Composer A R Rahman ropes her in to sing in Ram Gopal Varma's Rangeela (1995). The songs  "Rangeela Re" and Tanha Tanha were especially famous. After that in Daud (1997), the O Bhanware number with Yesudas reminds listeners that Asha is still in command over her voice. In 1999 film Takshak composed by Rehman, One of the best songs in the film, Rang de, goes to Asha Bhosle.
In 2001 a new composer Sandeep Chowta got her to sing the song  Kambakth Ishq number in Pyaar Tune Kya Kiya (2001), She was at her seductive best.In the same year, her duet with Udit Narayan, Radha kaise na jale, in the Aamir Khan-starrer Lagaan (2001) wins her more fame.She got  Dadasaheb Phalke Award in 2001.
Asha Bhosle has won seven Filmfare Best Female Playback Awards of 18 nominations.After receiving the award in 1979, Bhosle emulated her elder sister and requested that her name not be considered for the nominations hereafter.She was later given a Special Award for Rangeela in 1996, and the Filmfare Lifetime Achievement Award in 2001

Asha has won the National Film Award for Best Female Playback Singer twice:
Nowadays Asha is busy with her Restaurant business. She is a skilled cook. Her family, friends and colleagues in the industry swear by her delicious meals, especially her prawn Patties and Paya curry. 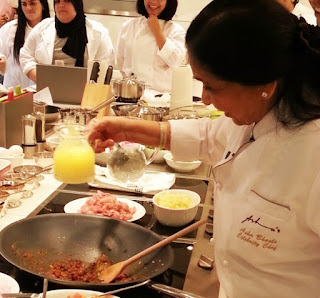 In fact, prompted by her love of food, Asha has started her restaurants in Dubai, Bahrain, Abu Dhabi,Qatar, Kuwait, and Birmingham and Manchester in UK.  Called Asha’s, the restaurants serve signature dishes inspired by Asha’s childhood and RD Burman’s favourite meals, with the singer’s all-time hits playing in the background.
Songs of Asha Bhosle
Song of Pareenita (1953).