Majrooh Sultanpuri and the Burmans 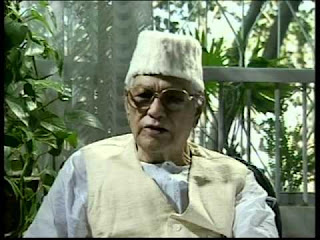 Majrooh Sultanpuri, a poet who didn't aspire to be a lyricist, became the most sought after versifier of Bollywood. You will be surprised to know that he was a practising Hakim in Sultanpur UP but also interest in writing poetry.
He started attending mushairas, and at one such mushaira in 1941, Jigar Moradabadi, the greatest traditional Shayar of Ghazals of the 20th century introduced him to the urban audiences. In 1945, Majrooh accompanied Jigar Saab for a mushaira in Bombay, where producer-director A R Kardar approached him to write songs for his films. Majrooh was reluctant but Jigar Saab insisted he accepts the offer. Majrooh wrote a few songs for the film Shahjehan (1946). And those songs composed by Naushad were sung by the all-time classic actor-singer K L Saigal.