Raj Khosla- A director with a fantastic ear for music 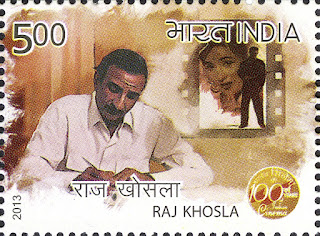 Raj Khosla ( 31 May 1925 – 9 June 1991) who came to Bombay to become a singer but he became an ace Director of the Golden Era. In his autobiography, Romancing With Life, Dev Anand mentions meeting a wannabe singer, Raj Khosla at a coffee joint around Mumbai's Flora Fountain. Dev Anand helped him and gave him a job of an assistant to Guru Dutt for the Navketan film Baazi 1951. It was to be the beginning of a very productive film career. He assisted Guru Dutt in his subsequent films.
Khosla would soon make his debut with Milap (1955). Contrary to his training, his first film was a story about a country bumpkin (Dev Anand, naturally) who comes into a fortune and does not know what to do with it. While the film was a flop, it had glimpses of Khosla's craftsmanship and a fine ear for music. One he would put to great use over his next films. 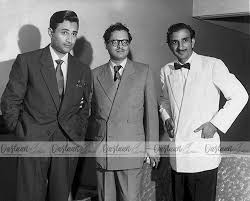 Guru Dutt who was producing CID (1956), had the confidence of Raj Khosla's capabilities gave Raj Khosla another chance of directing the film. The film starring Dev Anand was a hit After this came  Kala Pani (1958), Solva Saal (1958), Bombai Ka Babu (1960). Of these, C.I.D. is the perfect example of the template that would become Khosla's signature style.
His early background in classical music ensured that most of his films excelled in music. Art of picturising a song he learned from Guru Dutt. In most of his films, he would have at least a song based on folk tune e.g. C.I.D., Bambai Ka Babu, Solva Saal, Mera Saaya, Do Raaste, Mera Gaon Mera Desh to name a few.
Despite his traditionality in sticking to the formulaic tropes of the noir genre, Khosla added a uniquely Indian touch to it through music. A director with a fantastic ear for music, his films are remembered for their memorable musical scores. SD Burman, OP Nayyar, even RD Burman (who played the harmonica in 'Hai Apna Dil Toh Awara' in Solva Saal) benefitted with the nuanced picturisation of their songs by Khosla. 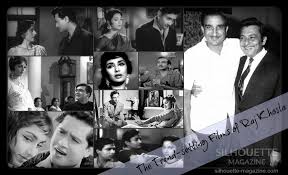 After Bombai Ka Babu(1960) he directed Ek Musafir Ek Hasina (1962).It was a musical film which was again a hit. After that, he directed suspense thrillers (Woh Kaun Thi? (1964), Mera Saaya (1966), Anita (1967) – his mystery trilogy with actress Sadhana), melodramas (Do Badan (1966), Do Raaste(1969)) or dacoit dramas (Mera Gaon Mera Desh (1971) .He also had hits like Prem Kahani (1975) starring the then hottest pair of the day Rajesh Khanna and Mumtaz, Nehle Pe Dehla (1976) andMain Tulsi Tere Aangan Ki (1978). One common factor of all these films was its hit music
After enjoying big hits like Main Tulsi Tere Aangan Ki (1978) and Dostana (1980) with Amitabh Bachchan, Zeenat Aman and Shatrughan Sinha, Khosla ran into some rough weather as his other films started flopping. A dispirited Khosla took refuge in alcohol and died in Mumbai on 9 June 1991, totally disillusioned with the film industry.