Nutan - The Heroine, not allowed to see her own film in a theatre 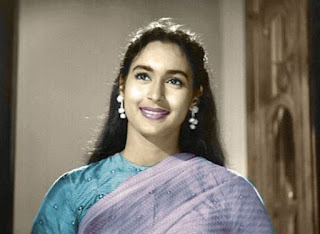 You will be surprised to know that Nutan who was the heroine of the film Nagina released in 1951 was not allowed to see her own film in Cinema Hall.  The hero of the film was Nasir Khan, the younger brother of Dilip Kumar.
Interestingly, her first hit film Nagina (1951) was given an “A” certificate; she couldn’t see her own film as she wasn’t an adult!. She was only 15 at the time of release. Nutan started her career at the age of 14 in the 1950 film Hamari Beti, directed by her mother. 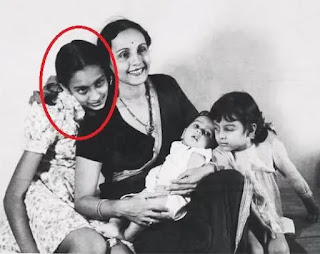 She worked in a few films until got adult. In fact, her mother sent her to Switzerland for further studies in 1953. She lived there for one year and came back. She was offered to play a challenging role of heroine opposite Balraj Sahni in Seema released in 1955. This role won her first Filmfare Best Actress Award.
She followed her success with a romantic comedy, Paying Guest,(1957) in which she co-starred with Dev Anand. After that in 1959, she acted opposite Raj Kapoor in Anari. This film was also a hit and brought her among top heroines of that time. In 1960, she starred opposite Raj Kapoor once again in Manmohan Desai's Chhalia. She received another Filmfare nomination for the role.
She formed a popular screen couple with co-star Dev Anand and the two acted in four films together – Paying Guest (1957), Baarish(1957), Manzil (1960) and Tere Ghar Ke Samne (1963). 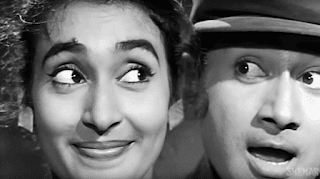 In 1963, Nutan starred in Bimal Roy's socio-realist Bandini as Kalyani, a young prisoner who was convicted after poisoning the wife of her lover (Ashok Kumar). Bandini was a major critical success, which was attributed by critics mostly to Nutan's portrayal, which is regarded as one of the finest performances in the history of Indian cinema. The film won the Filmfare Award for Best Movie and she received her third Best Actress Award.
Her fourth Filmfare Award came for Milan (1967) starring with Sunil Dutt with whom she worked earlier in Sujata. She got her fifth Filmfare best actress award, at the age of 42 for the film Main Tulsi Tere Aangan Ki (1978).
In the  1980s, she played roles in blockbuster films such as Meri Jung (1985), Naam (1986) and Karma (1986). Karma was notable for being the first time she was paired with actor Dilip Kumar. For Mere Jung, she won a Filmfare Award for Best Supporting Actress. Her last film released while she was alive was Kanoon Apna Apna in 1989. She died in 1991 of cancer.

Song of Chhabili 1960 Nutan sings in her own voice