The Magic of Nargis-Raj Kapoor, 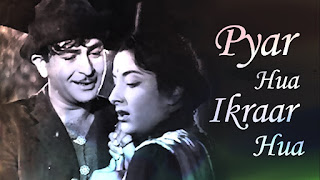 When you think of Raj Kapoor-Nargis, the first thought that comes to your mind is their evergreen songs that spoke of love in the rain (Pyar hua ikraar hua hai), of romance in the moonlit nights (Aaja sanam madhur chandni mein hum), of dreams and aspirations (Ghar aaya mera pardesi), of ecstasy (Dum bhar jo udhar moonh phere), of agony (Raja ki aayegi baraat)
Nargis and Raj Kapoor together gave a new dimension to mainstream cinema, capturing the imagination of audiences not just in India but across the globe.  Nargis was the star, a bigger star than RK in terms of box-office popularity.
Raj Kapoor wanted to sign Nargis for Aag. He knew Nargis was the bigger star attraction. She would pull in the crowds but Jaddan Bai( Nargis's mother) was not keen for her daughter to work in a three-heroine subject with Kamini Kaushal and Nigar Sultana sharing screen space with her. Raj Kapoor told Jaddan Bai that he would give the top billing to Nargis. Her brothers convinced their mother to let ‘Baby’ do the film (Nargis was fondly called ‘Baby’ by her friends and family). Ultimately she did get top billing in Aag, Raj Kapoor worked a lot on Nargis’ appearance in Aag. She got her hair shortened and got special makeup done on her face,
Aag signalled the beginning of what would become one of the most impactful screen pairings of all time for Hindi cinema. Barsaat followed a year later, rewriting the way romance would be portrayed on screen from now on.
The runaway success of Barsaat at the box-office, their on-screen chemistry had such an impact that Raj Kapoor used the famous still to modernize the R K Films logo. 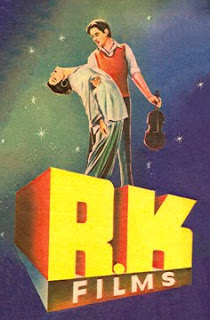 From this film, both came closer, the romance of reel life had shifted to real life. Raj Kapoor was married and was already a father made things more complicated. The Kapoor family, including the patriarch Prithviraj Kapoor, did not take kindly to his relationship with Nargis.
By this time they became the heartthrob of the nation. Coincidentally, 1949 also saw Mehboob Khan’s Andaaz, mounted on a grand scale stage a casting coup with the Dilip Kumar-Nargis-Raj Kapoor combine. Mehboob Khan had handled the triangle very deftly. Raj Kapoor played the role of a lover had a far-reaching impact on the audience.
Their romance was at its peak during the making of Awara. The film was released in 1951 which was a super hit. Raj Kapoor and Nargis had caught the fascination of the youth in a way no other screen couple had done before. Young men and women imitated their style, attitude and dress sense and hummed their songs.
Raj Kapoor and Nargis did 16 films together, etching out an indelible saga of love and romance on screen. Jagte Raho (1956) remains their last film together. The spectacular impact that Nargis makes with her appearance in the final part with ‘Jaago, Mohan Pyare Jaago’, is unparalleled.