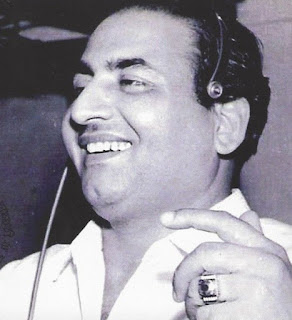 Mohammed Rafi (24 December 1924 – 31 July 1980)  is considered as one of the greatest and most influential singers of the Indian subcontinent. He was known for his ability to mold his voice to the persona and style of an actor, lip-syncing the song on screen in the movie. He has recorded songs for over a thousand Hindi films and has sung songs in various regional Indian languages as well as foreign languages, though primarily in Hindi-Urdu and Punjabi over which he had a strong command.
In this blog, I plan to divide Rafi’s very long career into 10-year slots, look for a film that has his first association with the music director, and then pick up one solo song that seems to slip from our memories.
1944 to 1953

Rafi moved to Bombay, Maharashtra in 1944. His first recorded song in a Hindi film was a duet with G M Durrani "Aji dil ho kaabu mein to dildar ki aisi taisi...," for Gaon Ki Gori, As can be expected the first five-year period of Rafi  had a very large number of music directors who deployed Mohammad Rafi first time.

Pandit Govindram, one of the then leading music director, teamed up with lyricist Ramesh Gupta for Hamara Sansar with what may be termed as a full-fledged 1st solo song. The experts may see that youthful rawness in Rafi’s voice but not in his singing prowess.

In 1946 S Quereshi another popular composer of that era composed a slightly fast-paced tune which is essentially in the nature of a traditional prayer. Shevan Rizvi has made required changes in the lyrics to suit the song to probably a 78-RPM
record singing length duration. In the years to come, Mohammad Rafi developed a special
forte for this genre.
Song of Arab Ka Sitara 1946

Composer Naushad took Rafi for the first time in a chorus with Shyam Kumar, Alauddin and others from the film" Pehle Aap." in 1944.  In 1945, he appeared on the screen for the song "Tera Jalwa Jis Ne Dekha" in the film Laila Majnu. He sang a number of songs for Naushad as part of the chorus, including "Mere Sapnon Ki Rani, Roohi Roohi" with K. L. Saigal, from the film Shahjahan (1946). Rafi sang "Tera Khilona Toota Balak" from Mehboob Khan's Anmol Ghadi (1946) and a duet with Noor Jehan in the 1947 film Jugnu, "Yahan Badla Wafa Ka".

C Ramachandra has scored a double solo in Safar. Kehke Bhi Na Aaye Tum can be treated as one of the popular among Mohammad Rafi’s early songs.C.Ramchandra went onto
compose 22 more songs of Mohammad Rafi by 1949
Song of Safar 1946

S D Burman also opens an account with Mohammad Rafi solo in Do Bhai. Raja Mahendi Ali Khan’s lyrics have been done a very fair justice by Mohammad Rafi in the way the song has been rendered. S.D. Burman used Rafi as a singing voice of Dev Anand and Guru Dutt in the years to come.
Song of Do Bhai 1947

In 1948 composer Ram Ganguly had used Mohammad Rafi in the maiden Raj Kapoor film Aag, but that is a duet with Shamshad Begum – Solah Baras Ki Bhayee Umariya.
Song of Aag 1948

Hans Raj Behl has used Mohmmad Rafi for one solo and one duet (with Geeta Dutt) for Chunariya. This can be taken as first of the signature HRB-Rafi song, which seems to pave for fairly qualitative combined work in the years to come.

Rafi's partnership with Shankar Jaikishan was among the most famous and successful in the Hindi film industry. Rafi sang his first song under Shankar Jaikishan in their Debute film Barsaat in 1949. This was the only song he sang in his movie
By the end of the year 1949, Mohammad Rafi became very popular among music directors and the public. The overall tally of Mohammad Rafi’s songs for the year 1949 is 121 songs, with 21 music directors, spread over 49 films.
Song of Barsaat 1949

In 1950, Mohammad Rafi had had 29 solos out of 108 songs He became a favorite of Naushad. This year another great music director Madan Mohan gave Rafi his first solo with him in the 1950 film Aankhen

The year 1952 was the year of Baiju Bawra, Naushad gave a slew of Rafi hits in Aan and Baiju Bawra. For Deewana, Naushad had one of Rafi’s immortal "Tasweer Banata Hun Teri Khoon-e-Jigar Se."
The year 1952 had 80 songs to Mohammad Rafi’s account, of which 32 songs were solos.
Song of Deewana 1952

The year 1953 had 31 solos songs of Mohammad Rafi out of a total of 71 songs. This year Salil Chaudhary made his debut with Do Bigha Zameen,  Rafi was given one song in this film. Rafi also sang for O P Nayyar for the first time in Baaz.
Here is the song that can be said to be one more defining step in Mohammad Rafi’s career.
Jal Jal Ke Shama Ki Tarah Fariyad from the film Fariyadi 1953 composed by Baldev Nath Baali
The song is cast in what we know as Mohammad Rafi’s signature style for the songs of sad mood.
Song of  Fariyadi 1953